News18» News»Movies»Kareena Kapoor Khan is Missing Her Pre-pregnancy Days: 'When will I Wear My Jeans Again?'
1-MIN READ

Kareena Kapoor Khan is Missing Her Pre-pregnancy Days: 'When will I Wear My Jeans Again?'

Kareena Kapoor Khan has shared an old photo of herself saying she can't wait to get into her pair of jeans again.

A day after stunning everyone with her monochrome look, Kareena Kapoor Khan is missing her jeans-wearing days. Expecting her second child with Saif Ali Khan, the actress is set to deliver soon.

The 40-year-old actress shared a throwback photo on her Instagram stories, which showed her wearing a yellow sweater and blue denims. "When will I wear my jeans again?" Kareena wondered in the caption. 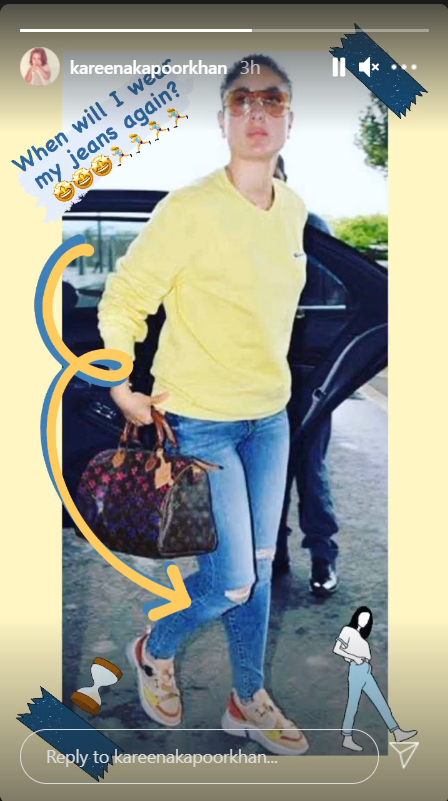 A day before, she had shared a black and white picture of herself in which she is seen sitting on a couch wearing a gown. The post sparked speculations that she is finally going into labour and will soon be delivering her second child.

The actress wrote in the caption, "I'm waiting..." followed by three red heart emoticons. Fans can't stop gushing over the stunning picture of the actress and have filled the comment section with speculations that the actress is finally going to give birth to her second baby.

One of Kareena's closest friends and actress Amrita Arora commented, "I'm also waiting..." Kareena and Amrita's gang of friends also includes Malaika Arora and Karisma Kapoor. The four are often seen hanging out together for brunches and get-togethers. Kareena’s post also had a comment from Malaika, who wrote, “Am also waiting..."