Kareena Kapoor Khan, Karisma Kapoor Hug Babita as She Cuts Cake on Mother's Day: The Reason We Are

Karisma Kapoor, too, shared a throwback photo with their mother Babita Kapoor on the occasion of Mother's Day.

Kareena Kapoor Khan and Karisma Kapoor shared the most adorable posts on the occasion of Mother’s Day with their mom Babita Kapoor. The former actress and wife of Randhir Kapoor can be seen cutting a cake on this special day as her two daughters sat beside and hugged her. Sharing the monochromatic picture, Kareena wrote, “The reason we are…♥️
@therealkarismakapoor.”

Her post received love from her fans and also from her industry colleagues. Her sister-in-law Saba Pataudi commented, “Trinity together always ❤️ ❤️❤️.”

Karisma, on the other hand, shared a throwback picture with her mother. In the photo, a young Karisma can be seen smiling as she sits beside her mom, with picturesque mountains in the background. She wrote, ”
Mama and the Mountains ❤️#happymothersday.” Earlier in the day, Kareena shared a snap with her two kids- Taimur and Jehangir. Kareena and Saif Ali Khan welcomed Taimur in 2016 and Jeh in 2021. In the click, the three can be seen enjoying in a swimming pool as Kareena holds her two cuties together. “The length and breadth of my life♥️Happy Mother’s Day (sic),” the caption reads. 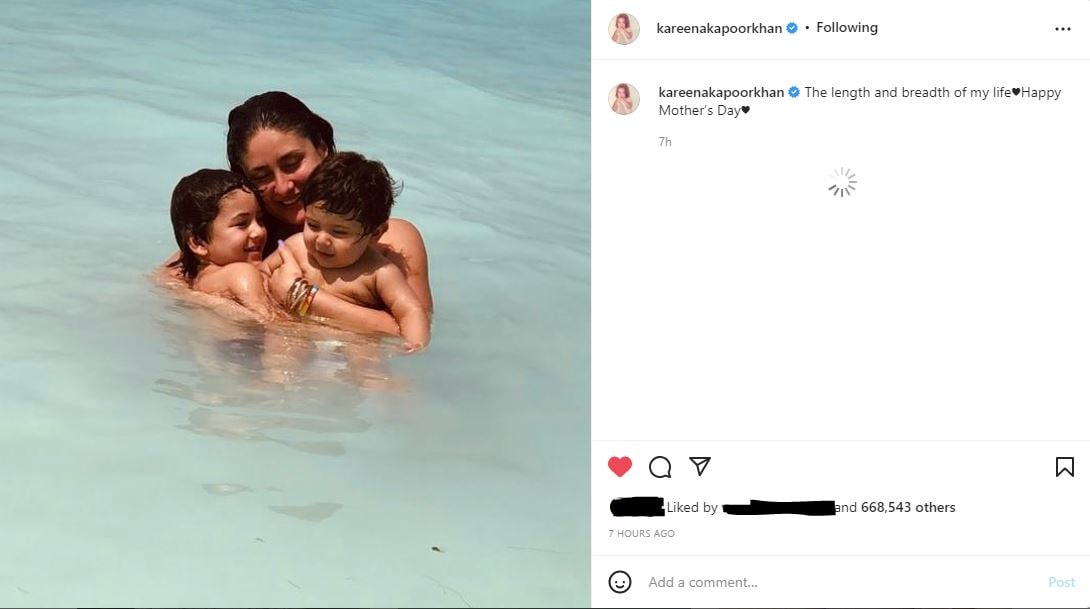 Meanwhile, on the work front, Kareena Kapoor Khan will be seen on the silver screen in Laal Singh Chaddha, where she will be seen with Aamir Khan. The movie is slated to release on August 11 this year. Apart from this, the actress recently announced her first OTT project with Netflix’s screen adaptation of Japanese author Keigo Higashino’s acclaimed work, The Devotion of Suspect X, which is being helmed by Sujoy Ghosh.

Karisma Kapoor, on the other hand, was last seen in the web series Mentalhood. She will next be seen in ‘Brown.’