In the photo, Kareena Kapoor Khan has her arms wrapped around Saif Ali Khan and it seems to have been clicked when the couple were shooting for Kurbaan.

Bollywood actors Kareena Kapoor Khan and Saif Ali Khan completed 9 years of marital bliss on Saturday, October 16, and to mark the occasion, the actress took to Instagram to share an unseen picture of the two. In the photo, Bebo has her arms wrapped around Saif and they are in a restaurant in Greece. It seems to have been clicked when the couple were shooting for Kurbaan. Along with the picture, she wrote, “Once upon a time in Greece… there was a bowl of soup and US ❤️❤️ and it changed my life… Happy anniversary to the most handsome man in the world ❤" 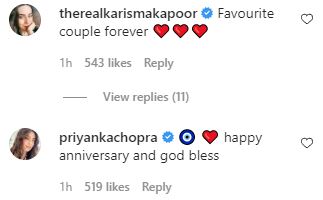 The couple tied the knot on October 16, 2012. In a recent episode of The Kapil Sharma Show, Saif recalled that he wanted an intimate wedding affair with Kareena.

Saif was married to Amrita Singh in 1991 and has two kids Sara Ali Khan and Ibrahim Ali Khan from their marriage. The couple got divorced in 2004 after 13 years of being together. Saif later tied the knot with Kareena in 2012. The couple welcomed their first child, Taimur Ali Khan in 2016. Kareena gave birth to their second child Jehangir Ali Khan in February this year.