On her Instagram story, Kareena Kapoor uploaded an image of a plate decked out with cut-pieces of raw mangoes.

Bollywood actress Kareena Kapoor Khan recently logged into her social media account to treat her online family with a devouring glimpse. On her Instagram story, Bebo uploaded an image of a plate decked out with cut-pieces of raw mangoes. The summer favourite nosh, which was peppered with flavoursome seasonings, is sure to ignite the season craving in you.

As Kareena posted the click, she wrote along, “Will be licking that entire plate clean.” 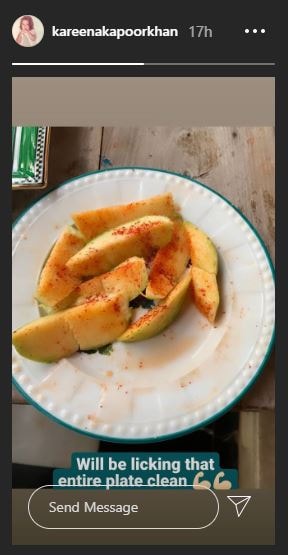 Not long ago, the Good Newwz actor dropped a beautiful shot with husband that made Instagrammers go ‘awwwwww’.

We see a heartening moment that Kareena is sharing with her better-half, Saif Ali Khan. The photo that is taken from behind shows the couple serenely lying on the grass. While Kareena is dressed in a brezzy pink outfit with hair left open, Saif is wearing a light blue tee as a book rests on his stomach with glasses pulled over his hair.

She will be seen alongside Aamir Khan in Laal Singh Chaddha, is Indian adaptation of the American comedy-drama Forrest Gump. The film is being helmed by Advait Chandan and written by Atul Kulkarni. Kareena will essay the character of Jahanara Begum in Karan Johar's multi-starrer historical drama, Takht.