Wishes are pouring in for Bollywood actor Anil Kapoor on his 64th birthday. On the occasion of his birthday, Kapoor’s movie AK vs AK will also be released on Netflix. The movie also features Sonam Kapoor, the eldest daughter of the star.

The Netflix original is directed by Vikramaditya Motwane and features Anurag Kashyap playing a negative role. Wishing Kapoor on his birthday, Anurag Kashyap posted a series of throwback pictures of him with the actor. Even though the Gangs of Wasseypur director has a love-hate relationship with the actor, the Instagram birthday post was a heart-warming one.

Anurag mentioned that when AK vs AK is releasing, he wanted to put out these pictures of their launch of the most prized AK, Allwyn Kalicharan, the film that never got made. The pictures were from the year 2003. Anurag thanked Kapoor and called him the “most secure (insecure actor) human being”. He also commended Kapoor’s perseverance and resilient spirit even at the age of 64.

Anurag said that Kapoor is the most healthy competitor and is as hungry as he was when he started out in the film industry. He further said that the man can teach a lot on how to make the best out of what one has.

Kapoor’s co-actor in 2008 movie Tashan, Kareena Kapoor Khan also shared a picture on the actor Instagram story and wished him a happy birthday. Captioning the picture, Kareena wrote, “Happy birthday Anil jii”. The 40-year-old actor called Kapoor her “forever favourite” and wished that they always gave it their best shot in life or in front of the camera. Kapoor’s daughter Sonam, who is currently in London with her husband Anand Ahuja, wished him through an Instagram post. The actress shared a picture of hers with father Kapoor and said that he is the most positive, kind, liberal human being, and that she is blessed to have his values instilled in her. She mentioned that she misses him and cannot wait to see him on the new year.

Anil Kapoor is currently shooting for his upcoming film Jug Jugg Jeeyo in Chandigarh with Varun Dhawan, Neetu Kapoor and Kiara Advani and celebrated his birthday with the team last night. On the occasion, his wife Sunita Kapoor was also present on the sets. Sharing a picture from the celebration, Varun tweeted that Anil is the youngest member of the Jug Jugg Jeeyo family and the hardest worker in the room and the best at his craft.

Happy birthday @AnilKapoor. U are the youngest member of the #jugjuggjiyo family. The hardest worker in the room and the best at his craft pic.twitter.com/CFuTM4UO7M— VarunDhawan (@Varun_dvn) December 24, 2020

Kapoor’s co-star from the hit movie Beta, Madhuri Dixit tweeted her birthday wishes for the actor. Madhuri called Kapoor her “jhakaas” friend and wished for a total dhamaal year for him. 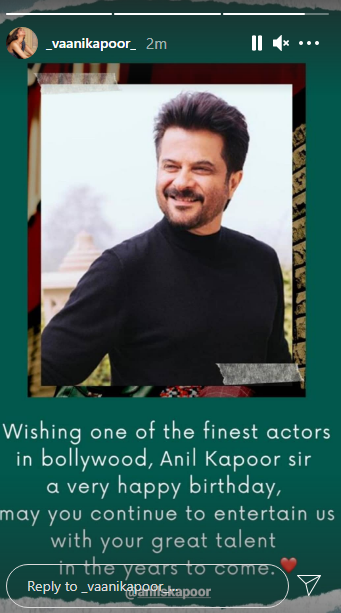 Meanwhile AK VS AK has released on Netflix.