On Tuesday, Kartik Aaryan was trending on social media because he responded to 'Bigg Boss 13' contestant Shehnaaz Gill's tweet in a playful manner.

Bollywood actor Kartik Aaryan was trending on social media all throughout Tuesday evening. The reason for the same was unbeknown to him but Bigg Boss 13 contestant Shehnaaz Gill's fans later made it clear to him why he was receiving so much love on social media.

Shehnaaz had posted a selfie on Instagram and had captioned it, "Respect everyone." Responding to her pic, Kartik questioned in the comments section, "Usko bhi jisne pehle bat khaya tha?" Kartik's response was a jibe at first coronavirus carriers who are believed to have got it from bats they consumed as food. Kartik's response to Shehnaaz's post went viral and the actress' fans were all hearts for the fact that he follows her on Instagram and responds to her posts. 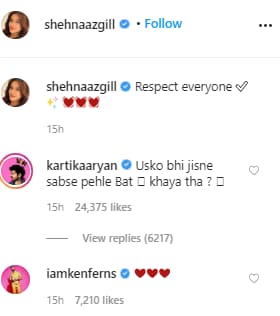 On the movies front, Kartik's Bhool Bhulaiyaa 2 with Kiara Advani is to go on the floors in September. The makers will reportedly be shifting base to Lucknow where the movie set has been built.

Kartik will also be shooting for Dostana 2, which features Janhvi Kapoor and debutante Lakshya in pivotal roles. However, Kartik's forthcoming 3D action film with Tanhaji: The Unsung Warrior director Om Raut has been pushed because makers want to shoot abroad and coronavirus scare is still looming large. The team is now making changes in the script as they are still committed to make the action movie.