Katrina Kaif Wants Vicky Kaushal to Get A Beard Like Hrithik Roshan; His ROFL Reply

Katrina Kaif shared a post by Hrithik Roshan as she wanted hubby Vicky Kaushal to grow a beard like him. Vicky has a hilarious response to the same.

Bollywood actress Katrina Kaif is mighty impressed with Hrithik Roshan’s bearded look, and wants hubby Vicky Kaushal to grown one like him. Vicky’s response on his wife’s request and his ROFL response has left fans asking for more. The Namaste London actress shared a reel from Hrithik’s Instagram feed in her stories on Thursday. Lauding her Bang Bang co-star’s bearded look, she wrote, “Loving this Beardo vibe,” along with tagging Hrithik and Vicky. 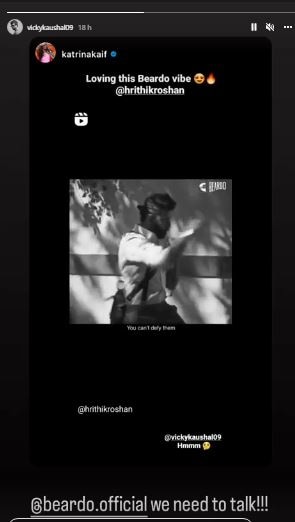 Though a part of Hrithik’s endorsement for a men’s grooming brand, it surely lead to an adorable exchange between Katrina and Vicky, who reshared it and wrote, “We need to talk” to the particular brand.

For the unversed, Katrina is good friends with Hrithik, whom she’s shared screen space in Zindagi Na Milegi Dobara, apart from Bang Bang. She also did the song Chikni Chameli in Agneepath in which Hrithik played the lead.

Well, this hasn’t been the first time, the much in love couple has teased each other on social media. Recently, when Vicky was shooting for a song sequence with Tripti Dimri in Croatia, choreographer Farah Khan posted a click with him in her Instagram stories. Farah tagged Katrina in the post and wrote, “sorry @katrinakaif he s found some1 else.”

Katrina was quick to reshare the picture with the reply, “Your allowed @farahkhankunder” along with heart emojis. She also added the song Kuch Toh Hua Hai from Kal Ho Naa Ho.

Vicky Kaushal and Katrina Kaif’s wedding last year was one of the most unexpected yet much-awaited unions. The Bollywood couple kept their relationship under wrap and only shared it once they tied the knot in a dreamy location in Rajasthan. The Uri actor recently spoke about his marriage to the Welcome actress and said that he feels settled. Talking to Kusha Kapila at an award show, the actor talked about his married life and said, “It’s going good. I actually feel settled. I think that’s the appropriate word. God has been kind, be it my personal or professional life.”

The digital influencer also asked him about his friends’ reaction to Katrina being his wife, to which he responded, “They were at the wedding and now hung around for a long time. So they are cool about it.”

The actor further revealed that people called him the ‘chillest groom’ at his wedding. He said he used to chill in shorts and t-shirts up until the ceremonies, whereas his friends used to be ready in Sherwanis.

On the work front, Vicky has started working on his next movie titled Sam Bahadur which will be helmed by Meghna Gulzar. Sam Bahadur is a biopic based on the life of India’s first Field Marshal Sam Manekshaw. He was also the Indian Army Chief during the Indo-Pakistani War of 1971. Vicky Kaushal announced the movie in 2019.

Meanwhile, apart from Sam Bahadur, Vicky Kaushal has a number of other movies in his pipeline too. The actor will be seen in Govinda Naam Mera where he will be sharing the screen with Kiata Advani and Bhumi Pednekar. He will also be seen in The Great Indian Family and Laxman Utekar’s untitled next. The latter will see him with Sara Ali Khan. He also has a film with Tripti Dimri.

Katrina Kaif, on the other hand, will be seen in Tiger 3 with Salman Khan. She also has Merry Christmas, Phone Bhoot and Jee Le Zaraa in the pipeline.