Priyanka Chopra and Nick Jonas have cruised through their first year as a married couple. Family members Kevin and Danielle Jonas wished the couple on the occasion of their first marriage anniversary.

Kevin and Danielle Jonas shared intimate pictures of Priyanka and Nick from their December 1 wedding in 2018 to mark the couple's first anniversary. While Kevin re-posted the same image that Nick used to wish Priyanka on the occasion, Danielle picked out a beautiful image from their digital album and shared it on her Instagram stories with an adorable message that read, "Happy Anniversary".

Check out Kevin and Danielle's wedding anniversary wish for Priyanka and Nick below: 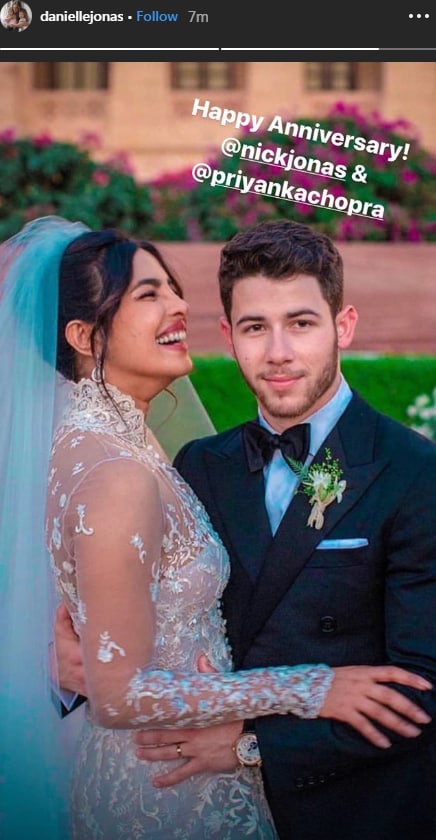 
Earlier, both Priyanka and Nick celebrated one year of their marriage with adorable throwback pics from the couple's wedding ceremony. Nick shared a stunning image of Nickyanka from their Christian wedding ceremony and they can be seen holding hands and exchanging vows. The couple is surrounded by family and friends on either sides.

One year ago today we said forever... well forever isn’t nearly long enough. I love you with all of my heart @priyankachopra happy anniversary. pic.twitter.com/7UpmLmPTu8

Responding to Nick's wish for the couple, Priyanka wrote on Twitter, "My promise. Then..today.. forever. You bring me joy, grace, balance, excitement, passion.. all in the same moment...thank you for finding me..Happy First wedding anniversary Husband.. @nickjonas. And Thank you to everyone for the love and good wishes. We feel blessed (sic)." She even thanked fans and well wishers for their affection for the couple.

And Thank you to everyone for the love and good wishes. We feel blessed. pic.twitter.com/UZgnYQZlVx

She later shared intimate pics of the couple from their wedding.

Priyanka and Nick made their first public appearance together back in May 2017 for the Met Gala. Soon, they went on to make appearances together in several events. The two dated for over a year, after which they took the wedding vows and began their married life together.