Kim Kardashian West, who welcomed home her fourth child, named Psalm West, through surrogacy on May 10, took to social media to share a picture of the adorable one with the world. The photo of Psalm is a close up of the baby boy as he rests peacefully in his cradle. With hands folded behind his head, Psalm, draped in white baby clothes, looks like the sweetest and the most adorable thing in the world right now.

Kim and Kanye have been married since 2014 and have three other children: North, 5; Saint, 3; and Chicago, 1. Taking to Instagram, Kim shared the image and wrote, "Psalm Ye." As soon as the image surfaced on social media, friends and fans of the Keeping Up with the Kardashians star started showering their love on the couple and the new born baby Psalm. See Kim's post here:

See some reactions to the picture of Psalm here: 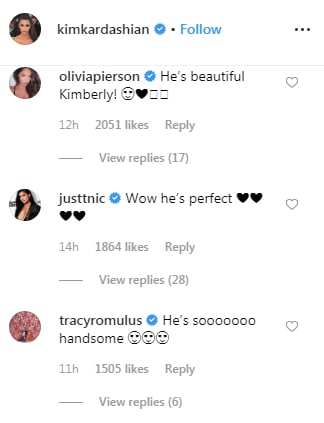 Kim and Kanye's youngest son's name has a religious significance as Psalm is a reference to the Holy Bible. While it is known that the 41-year-old rapper, Kanye, is going through a spiritual revival lately, with regular Sunday Service gatherings that started in the beginning of this year, it did not go amiss that their newborn son's name could be a way of furthering the idea. Kanye had also organised Sunday service at Coachella this year and sold 'Holy Spirit' printed hoodies at the event.