Athiya Shetty baked some banana bread for rumoured boyfriend KL Rahul, but she ended up burning one side of it.

Actress Athiya Shetty seems to have an interest in baking. The Motichoor Chaknachoor star recently made some delicious banana bread for cricketer KL Rahul, whom she is said to be dating.

The banana bread ended up getting burnt on one side. The Indian cricketer took to Instagram to share the baked bread, with an expectation vs reality twist.

The non-burnt side was termed as 'expectation' while the other side was captioned as 'reality'. He also mentioned that it was gluten free and sugar free. 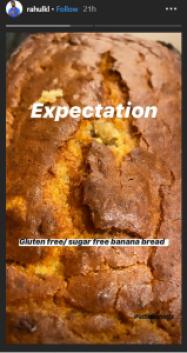 While the duo has not spill the beans on their relationship yet, they are often clicked together. Last year, the right hand batsman shared a photo with the actress. In the picture, Rahul can be seen holding a telephone while the actress is resting on the phone booth.

The cricketer has a serious expression on his face while Athiya can be seen smiling wide. The post went viral on Instagram with over one million likes. He captioned it, “Hello, devi prasad….?”

Athiya/s father, actor Suniel Shetty does not have much to say on his daughter's alleged relationship. He earlier told ETimes, "We love the kids and the kids they are dating. I think more than profession, being happy in life is very important today."

The star kid made her Bollywood debut in 2015 with the romantic film Hero, opposite Sooraj Pancholi. The movie was a remake of Subhash Ghai's film of the same name, released in 1983.