Kota Factory, created by Saurabh Khanna and directed by Raghav Subbu, is an ode to friendship and a biting commentary on brazen capitalism ingrained in our education system.

Harking back to the tragicomedy genre, with trademark TVF tropes-- nostalgic tales and idiosyncratic characters-- in masterful monochrome colours, is Kota Factory, a biting commentary on pan-India coaching culture, which is, in short, a system that posits itself as the touchstone of brain business and thrives as a parallel education arrangement that has converted classrooms into a landscape of insecurity and personal tragedy.

Developed for web by Saurabh Khanna (Yeh Meri Family), with a relatively lesser known team of director Raghav Subbu, DoP Jerin Paul and writers Abhishek Yadav and Himanshu Chouhan, Kota Factory is a quintessential observational comedy, set in the self-aware, ultra competitive and dark atmosphere of Kota, Rajasthan, a place where fragility is surplus and experience breeds trauma. In that, Kota Factory maintains an edge over other shows in the genre, courtesy of its on-point, deadpan humour and a relatably bittersweet aftertaste of existential battle that the protagonist is facing. The 5-episode series follows a teenager, Vaibhav Pandey (Mayur More), who joins a coaching institute that preps students for the Indian Institute of Technology (IIT) entrance examination. Vaibhav has to deal with intense academic pressure, with friends living in the same condition of denial and dire rivalry. Meena (Ranjan Raj) and Uday (Alam Khan), his buddies and competitors, help him settle into this alien state slowly, but at a place where emotional accessibility is pretentious, or at least distant, will he get by and come into his own is what the makers are setting out to explore.

The cast is designed for effect. More presents us with a flawed, three dimensional being, trapped loosely inside ambiguity and indecision. Since we trace Vaibhav battling odds of cut throat competition, compounded by his own weaknesses, his liberation and glory becomes our victory. Every exam he fails bogs us down and every problem solved trumps our anxieties. More, as an actor, delivers more in silences and subtle facial ticks than when he is out shouting his case on the streets of the city. The final episode, titled Overhaul, has a long end sequence of contemplation, in which More shines, as he finally blossoms into an unsure, scared but a slightly confident IIT aspirant, much like all of the city students. Ranjan Raj and Alam Khan play supporting actors, who fall in the city of Kota as naturally as the hovering mist. They are two perfectly colourful and unsynchronised chaps and the three actors share a delightful chemistry on screen. Raj's humour and his treatment of the trapped and sidelined character Meena, who frequently slips into class consciousnesses, will surely crack you up. Khan is equally effortless, however he has done a similar show in the past, and sort of a similar character--Chudail in Laakhon Mein Ek Season 1.

Ahsaas Channa, as the bossy girlfriend Shivangi Ranawat, has small yet significantly recurring appearances in the show. Shivangi, who practices small time medicine (gives out prescription for depression!), apart from full time straight faced humour and sarcasm, is also a commentary on women in Kota-- outnumbered but thriving.

Kota Factory also features Jitendra Kumar in a pivotal role. He impresses as the teacher, mentor and overseer Jeetu Bhaiya and reinforces our faith in the fact that behind glossy advertising and burgeoning capitalism, aptly represented by Deepak Simwal (Gyan Mittal), owner Prodigy classes, the education system may still find redemption. 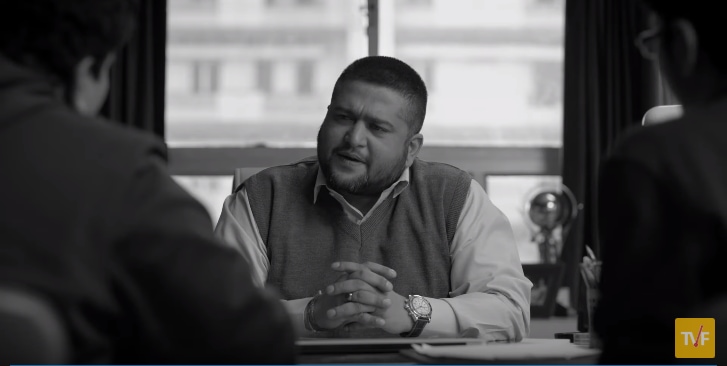 The series stands out in delivering set pieces that are high on emotional octave, bolstered by some audaciously creative cinematography and mood sound design. The tighter frames are as claustrophobic as the wide angles are liberating. Camerawork also acts as a leitmotif and increases immersion through long takes and careful blocking and choreography of actors.

You can watch Kota Factory for a fresh and funny twist on the thematic call back to the vulnerability that brings us together. The show is interested in cathartic resolutions for further set-ups, but there's an underlying symbolism almost throughout. A delightfully fun time in front of the TV screens is what Kota Factory has to offer and only miss it if you are preparing for IIT.