Mahesh Babu’s daughter Sitara Ghattamaneni took to Instagram and remembered her grandfather, actor Krishna. “Weekday lunch will never be the same again….. You taught me so many valuable things… always made me smile 😔 Now all that’s left is my memory of you. You’re my hero… I hope I can make you proud someday. I’ll miss you so much Thatha garu,” she wrote.

The team of Gopichand30 paid a tribute to actor Krishna on their sets in Kolkata. The pictures emerged online. More visuals of Mahesh Babu from the funeral of his father, superstar Krishna.

A massive gathering of fans bid adieu to the superstar at his funeral. More pics:

Superstar Krishna, who played a wide variety of roles in his career, always wished to play and produce the biopic of Maratha warrior and King Shri Chatrapathi Sivaji. He had also said in interviews that he would like to host a talk show like Amitabh Bachchan’s Kaun Banega Crorepathi in Telugu, which currently airs as Meelo Yevaru Koteswarudu. He also said he wanted to act with his grandchildren on screen.

Noted evangelist KA Paul, founder of the Praja Shanti Party, was among those who paid their respects to Krishna. He also talked about his relationship with the late actor and about his greatness. Even though there will be many performers, Krishna Garu was a decent man who sought peace, according to K A Paul.

Superstar Krishna was cremated with full state honours on Wednesday afternoon in the presence of his family. Prabhas, Allu Arjun and Jr NTR among other celebrities attended the late actor’s last rites. The actor, whose film career spanned nearly five decades, had acted in more than 350 films in a variety of roles and was also awarded the Padma Bhushan in 2009 by the Government of India. 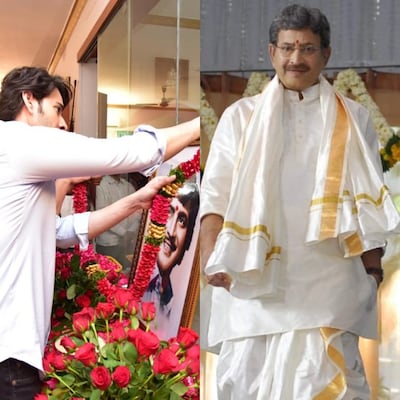 Actor Mahesh Babu broke down into tears as he performed last rites of his father, Superstar Krishna.

Krishna garu was and will always be a true superstar.A pioneer and a real legend.

My deepest condolences to his family and fans.. Om Shanti 🙏 pic.twitter.com/1Vp1nC0Hui

Actress Shobhita Dhulipala said that she was “extremely saddened” to hear about the sudden loss of Superstar Krishna. She tweeted, “Your legacy will continue to remain through your brilliant and splendid work. Sending lots of positivity and love to @urstrulyMahesh and family during this very difficult period of time. #RIPSuperStarKrishnaGaru.”

Extremely saddened to hear of the sudden loss of Krishna Garu. Your legacy will continue to remain through your brilliant and splendid work. Sending lots of positivity and love to @urstrulyMahesh and family during this very difficult period of time. #RIPSuperStarKrishnaGaru 💔

Director-choreographer Prabhudheva penned a moving tribute to Superstar Krishna. He shared a throwback photo of the late Superstar with a series of folded hand emojis.

Fans have gathered for the last rites of Superstar Krishna, who passed away on Tuesday morning after reportedly suffering a cardiac arrest. Krishna, whose real name was Ghattamaneni Sivarama Krishna, was known as a superstar in the Telugu film industry. He began his career in movies with blink-and-you-miss appearances in films such as Kula Gothralu (1961), Padandi Mundhuku (1962), and Paruvu Prathishta (1963). He was later cast in Thene Manasulu (1965) as one of the male leads. Krishna further established his identity as an actor, director, and film producer with films such as Mosagallagu Mosagadu, Alluri Sita Ramaraju, Goodhachari 116, among others.

The actor, whose film career spanned nearly five decades, had acted in more than 350 films in a variety of roles and was also awarded the Padma Bhushan in 2009 by the Government of India. His notable films also included Ooriki Monagaadu, Bangaaru Bhoomi, Kiraayi Kotigaadu, Adavi Simhaalu, Sakthi and Prajaarajyam. His son Mahesh Babu has continued his legacy forward by becoming one of the top league stars in the Telugu film industry.

Krishna was the father of actor Mahesh Babu, Padmavathi, Manjula and Priyadarshini. Krishna’s first wife Indira Devi passed away in September this year, while his elder son Ramesh Babu died in January. Krishna was said to have been deeply affected by these tragedies.