Tiger Shroff’s sister Krishna Shroff is seen expressing her love for Disha Patani in her recent Instagram story. The fitness enthusiast shared her photograph with Tiger’s rumoured girlfriend on Monday where she is seen planting a kiss on the actress' cheeks. In the picture, Disha is seen holding the camera as they both pose. The 28-year-old actress is wearing a pink and lavender floral dress, whereas Krishna is seen in a white outfit.

Krishna also featured in her brother Tiger’s Instagram story where the two are seen driving together in a car. Posing for the camera, the Shroff siblings exuded their confidence for their online followers as Chris Brown’s Forever played in the video. 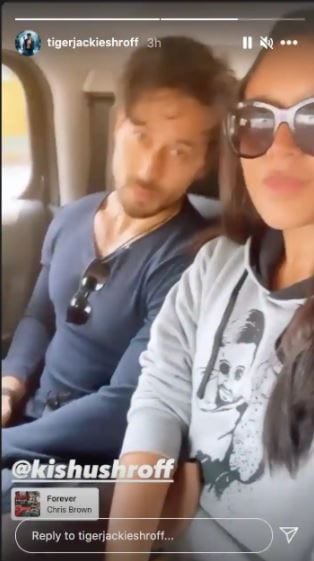 This is not the first time Disha and Krishna have featured in each other’s social media posts. The two created a fun video last year where they dressed up in casual clothes and danced to the TikTok trend of “bored in the house”. The video posted on March 24, 2020 garnered over 8,335,442 views on Instagram and even received comments from Tiger’s mother Ayesha Shroff who posted red heart emojis along with a few smileys.

Besides impressing his fans with his action movies and dancing style, Tiger has also ventured into the singing field. The actor shared a glimpse of the acoustic version of his new song titled Casanova on Sunday. Last month the original song had dropped on YouTube that went on to garner 12 million views and its acoustic version will now be out on Tuesday just ahead of Valentine’s week.