Kriti and Nupur Sanon shared glimpses from their family getaway amid coronavirus scare. Take a look.

Kriti Sanon has jetted off to an undisclosed location with her family for a vacation. The actress took to Instagram stories and shared a short clip in which she showed us an infinity pool. Kriti wrote that the vacation was a much-needed one. She also wrote alongside the clip of swimming pool, "My calm corner for a few days."

Kriti's sister Nupur Sanon also posted a similar video on social media and wrote over it, "Home for the next few days." 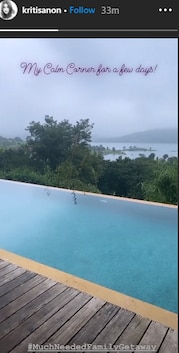 Kriti has been facing an emotionally turbulent time after the death of her friend and co-star Sushant Singh Rajput on June 14. The actress also attended Sushant's last rites in Mumbai. Kriti has been sharing her thoughts on social media for a while now. Recently, people treated one of her posts as "cryptic" and linked it with late actor Sushant, who was found dead at his Bandra residence.

THINK , BELIEVE , MANIFEST I believe in energy. The thoughts you think & the words you speak determine what you receive.. If you let out negativity and frustration, it might calm you for that moment, but you’d never eventually be at peace.. In other words, you can’t throw shit all around and wonder why your life stinks.. ‍♀️ So think positive and be kind because the energy you emit will bounce back at you ultimately. Make sure you emit what you would like to receive. Some call it the law of attraction. Some call it Karma. #yourecievewhatyouputout #spreadlove #MyMantra #audiobook

The actress had been supporting for a CBI probe into the Sushant's death case. On the work front, Kriti will next be seen in Mimi, which is remake of a Marathi film. In it, she plays a surrogate mother and even gained weight for various portions. She is also cast opposite Akshay Kumar in Bachchan Pandey.