Malaika Arora, along with Akansha Ranjan and Kubbra Sait had a great time during their yoga session recently as the three divas sweated it out together.

Bollywood’s Yoga idol Malaika Arora, along with Akansha Ranjan and Kubbra Sait had a great time during their yoga session recently as the three divas sweated it out together. The videos shared by Yogi Sarvesh Shashi gives a glimpse of the actors performing several yoga asanas and almost perfect them. In his first video, which is a boomerang, the ladies are seen lying on the floor and rocking. He then shared a photo of Anushka doing a yoga pose, which he termed as his favourite. Sharing Kubbra’s photo, he called her warrior. He also shared a solo video of Malaika working out. 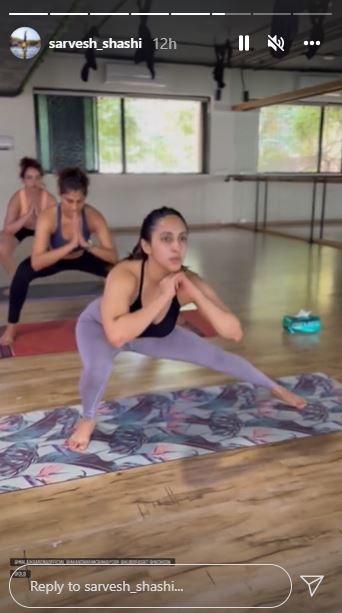 Earlier in the week, Kubbra and Malaika were clicked together as they stepped out for their yoga classes. Malaika was wearing a casual crop top paired with shorts. She had her hair neatly tied in a ponytail. Kubbra, on the other hand, wore a sweatshirt paired with pink pants.

Malaika and Anushka, too, was clicked meeting before their classes.

Read: Malaika Arora in a Bikini And Maldives Together Look Hotter Than Hot; Shot By Arjun Kapoor

Meanwhile, Malaika is also in the news for her relationship with Bollywood actor Arjun Kapoor. After much speculation and rumours, they finally confirmed their relationship in 2019. Malaika was earlier married to actor Arbaaz Khan from 1998 to 2016 and have a son together, Arhaan. Her son recently left India to pursue higher studies.