Malaika Arora and Arjun Kapoor are in a relationship for more than three years. (Photo: Instagram)

Malaika Arora and Arjun Kapoor breaking up are nothing but rumours. The couple has been under continuous public scrutiny over their romance.

Malaika Arora and Arjun Kapoor are going strong and the reports of them calling their relationship off are nothing but rumours. The reports are citing the fact that Arjun and Malaika won’t be celebrating Christmas 2021 and New Year 2022 together as the hint that all is not well between the Bollywood couple.

However, the pair has finally put an end to all such speculations with their stunning pics from their latest romantic beach vacation to the Maldives. While in one of the pics, Arjun can be seen enjoying the view, in another post, Malaika can be seen soaking in the sun in her tracksuit. 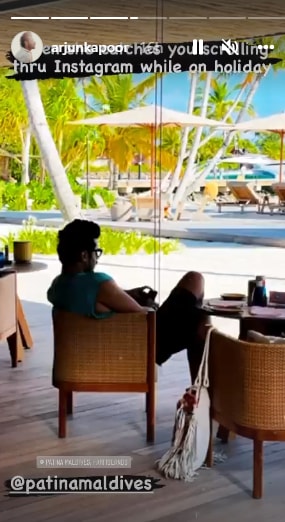 Malaika and Arjun are the most talked-about couple of Bollywood. They often create a buzz on social media with their mushy pictures. After much speculation and rumours, they finally confirmed their relationship in 2019. Malaika was earlier married to actor Arbaaz Khan from 1998 to 2016 and have a son together, Arhaan.

During Diwali, the couple was clicked walking hand in hand to Anil Kapoor’s house party. Arjun also shared an unseen photo of the couple from the bash wherein they are caught in a candid moment.

Arjun Kapoor, on the other hand, was last seen in the film Bhoot Police with Saif Ali Khan, Yami Gautam and Jacqueline Fernandez. Next, he will be seen in Mohit Suri’s Ek Villain Returns with John Abraham, Aditya Roy Kapur, Disha Patani, and Tara Sutaria.