Malaika Arora finds TikTok videos "ridiculous." Jannat Zubair has no qualms letting go of her 28 million followers on the app.

The Government of India banned as many as 59 Chinese owned smartphone apps in the country on Monday. TikTok, a popular social media platform owned by Chinese tech company ByteDance, is on the list of banned apps. The video-sharing platform was extremely popular among film and television stars, who used it on a regular basis to entertain fans.

While several Bollywood stars loved to use TikTok, make comedy or dance videos, there are some who never got onto the platform. Malaika Arora is one of them. The Bollywood diva is glad that the app has been banned as she found the videos made by the users "ridiculous."

Sharing a news flash announcing the ban on TikTok, Malaika wrote, "The best news I have heard in lockdown... finally we will not be subjected to people's ridiculous videos." 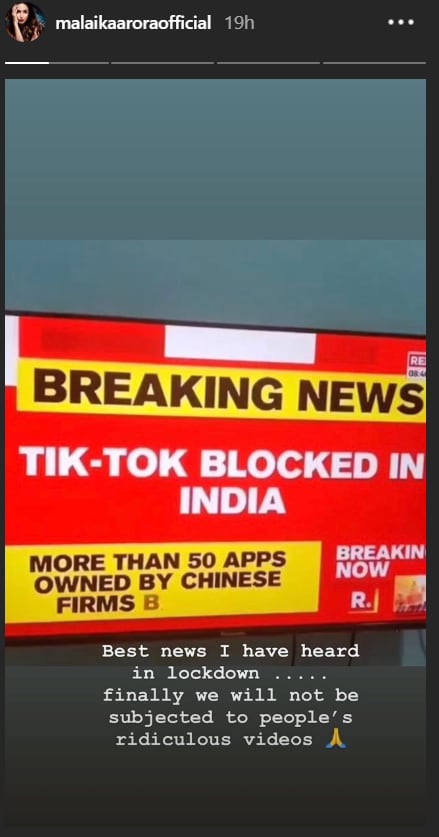 Stars like Shilpa Shetty and Riteish Deshmukh, who had millions of followers on TikTok, are yet to react to the decision.

But she is happy with the ban imposed on the app. "I was waiting for this news of the ban. I am very happy and completely support this decision. I support not just TikTok ban but also the ban of all other Chinese apps," she told India Today.

She added, "There are so many TikTokers, who'll be shocked by this news, but somewhere we all had an idea that TikTok could be banned. I believe those who were only dependent on TikTok could explore their talent elsewhere."