Malaika Arora shared a throwback photo with her girl gang

On Sunday, Malaika Arora took to social media to share a group photo of her with Kareena Kapoor Khan, Karisma Kapoor, Amrita Arora and Mallika Bhat.

Malaika Arora and her girl gang- Kareena Kapoor Khan, Karisma Kapoor and Amrita Arora is one such friend group in Bollywood that constantly serves friendship goals to their fans and followers. The diva often shares photos with the actresses and are seen with each other on almost every occasion. Now, Malaika took to social media to share that she is missing her girl gang.

On Sunday, the actress took to social media to share a group photo of her with Kareena, Karisma, Amrita and Mallika Bhat. In the snap, Lolo, Malaika and Amrita can be seen sitting on a couch while Bebo and Mallika stand on two opposite sides. Kareena and Amrita twinned in white while Malaika looked gorgeous in a black and white bralette. Karisma, on the other hand, went for a violet top and black pants. 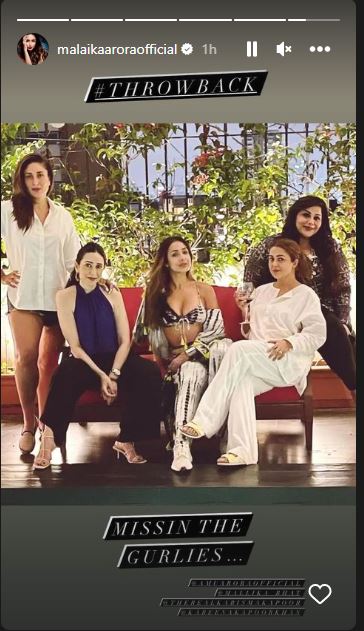 Meanwhile, Malaika was clicked with her actor-beau Arjun Kapoor last night, post their dinner date. The Ek Villain 2 actor donned a black shirt with black trousers for their outing. He added a bit of swag to his looks by choosing a pair of shades. Malaika layered a black top with a blazer of the same colour and paired it with black pants. She completed her looks in black heels.

A couple of days ago, Malaika sparked marriage rumours with Arjun Kapoor after she shared a cryptic post on Instagram, saying she said yes. It was later revealed that she said yes to a reality show. The show will revolve around Malaika’s family, friends, and work. She is set to give fans access to her past, present, and future through unfiltered conversations in the new show. It is also reported that the reality show will feature guest appearances from her friends and family who will spill the tea on her.