Image of Malaika Arora and Arjun Kapoor, courtesy of Instagram

Arjun Kapoor is known for mocking his co-actors and friends on social media. But this time, tables turned when Malaika Arora trolled the actor with her funny comment on his post.

Be it trolling Katrina Kaif for wearing sunglasses during the night to mocking Ranveer Singh's sartorial choices, Arjun Kapoor never leaves a chance to post a quirky comment on his friends' posts on social media. But this time, tables turned when Malaika Arora trolled the actor with her funny comment on his post.

On Sunday, Arjun took to Instagram to post a picture of himself looking in the mirror as he dressed up for Lakme Fashion Week 2019. "Mirror mirror (not)on the wall !!! #aboutlastnight #lakmefashionweek2019 #vanitywalapic," he captioned the picture.

Soon after, his girlfriend Malaika Arora rushed to the comment section and wrote, "Wah Kya humour." 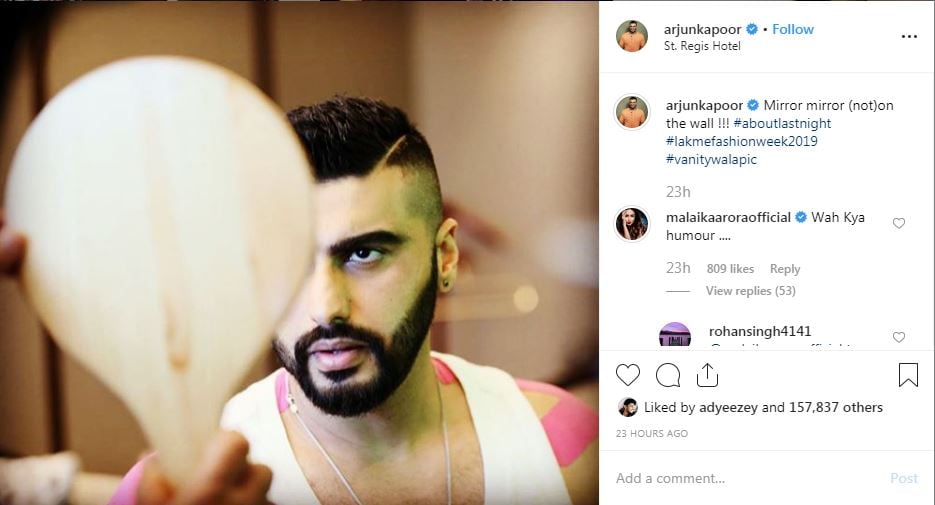 It was on Arjun's birthday when Malaika made her relationship with him official. She shared a romantic photograph with the actor on social media to wish him on his 34th birthday. "Happy birthday my crazy, insanely funny and amazing Arjun Kapoor... Love and happiness always," she had captioned the image in which the two held hands and snuggled away.

After keeping their relationship under wraps for a long time, Arjun and Malaika have now become more open. From dinner dates to parties and film screenings, the couple have been photographed together several times.

Malaika and Arjun were first linked in 2017 and they continued to step out together in and around Mumbai on multiple occasions since then. In fact, there have been persistent rumours that the two were planning to tie the knot this year.

However, Arjun dismissed marriage rumours, saying he would let the world know whenever he ties the knot.