From Margot Robbie to Dua Lipa to Elizabeth Banks, a number of Hollywood celebs took to social media to hail Weinstein's conviction.

Former movie producer Harvey Weinstein was convicted of sexual assault and rape in a New York court on Monday and taken off to jail in handcuffs, a victory for the #MeToo movement that inspired women to publicly accuse powerful men of misconduct.

Once one of Hollywood’s most influential producers, Weinstein, 67, was found guilty of sexually assaulting former production assistant Mimi Haleyi in 2006 and raping Jessica Mann, a onetime aspiring actress, in 2013.

Officers helped Weinstein unsteadily to his feet before leading him away. His lawyer said Weinstein, who has used a walker throughout the trial, was ordered to be taken to a medical facility at New York City’s Rikers Island jail complex.

His sentencing hearing was set for March 11. The attorney vowed to appeal.

Weinstein never testified in his defense. He told reporters during the trial that he had wanted to speak but his lawyers said it was unnecessary because the case against him was weak.

Actress Rose McGowan, who had accused Weinstein of rape, wrote on Twitter: “Today is a powerful day & a huge step forward in our collective healing.”

A statement for the #MeToo movement said: “The jury worked with an incredibly narrow and unjust set of laws governing sexual assault, and though he was not convicted on all counts, Harvey Weinstein will have to answer for his crimes.”

BREAKING: The #silencebreakers released this powerful statement on Harvey Weinstein’s two guilty counts. And their voices are just getting stronger. #TIMESUP pic.twitter.com/OLUkm983ur

From Margot Robbie to Dua Lipa to Elizabeth Banks, a number of Hollywood celebs took to social media to hail Weinstein's conviction. Take a look: 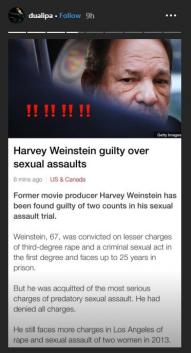 I am heartened for his victims and for all those who said #metoo and #TimesUp that some justice has been done. https://t.co/5PYPfhRPjq

Thanks my best pal.
This is still a huge victory and know that it will give hope and courage to others to speak their truth. #WeinsteinGuilty #TimesUp #AnnabellaSciorra https://t.co/TlthIg6NGs

Harvey Weinstein is no longer an alleged rapist.

Harvey Weinstein is a convicted rapist.

I applaud the women who bravely stepped forward to help forever alter the conversation around what they — and all of us — have to put up with. Gratified to see some justice being served here. #MeToo https://t.co/wR4f66uecj

If there's a man who doesn't deserve bail, it's him.

Weinstein faces up to 25 years in prison on the sexual assault conviction. He was also convicted of third degree rape - sexual intercourse without consent - which carries a prison sentence of up to four years.

The jury of seven men and five women acquitted Weinstein on the most serious charges, which carried a potential life sentence.