Vijay and Vijay Sethupathi starrer Master has released in cinema halls on the occasion of Pongal. Early morning shows saw packed houses in some places in Southern India. Fans even gathered outside theaters and put up cutouts of the lead actors to celebrate the movie release. However, the big question remains unanswered. Will the enigmatic Vijay duo finally pull a wary audience back to cinema halls amid coronavirus scare?

As advanced bookings opened for Master release, some places saw fans ending up in long queues as they seemed to forget social distancing and other Covid protocols. Images from outside multiplexes and single screen cinemas have been doing the rounds on social media, which see viewers gathered in huge numbers, trying to catch as early a show as possible. Some have even criticised Vijay and Master makers' decision to release the film in cinemas as the pandemic scare still looms large. On the other hand, the Indian film industry has pinned its hopes on Master, which is a big budget release since theaters have reopened amid the new normal.

Master Movie Review: Vijay's Film has All Trappings of a Mass Entertainer Actress Malavika Mohanan, who features in Master, took to social media and shared her candid moment with Vijay ahead of film's release on Wednesday. She wished Thalapathy happy Pongal with this lovely BTS still from shoot. The highly-anticipated film Master, starring Tamil superstars Thalapathy Vijay and Vijay Sethupathi, could well be on its way to create a record at the box office despite opening amid the pandemic and… 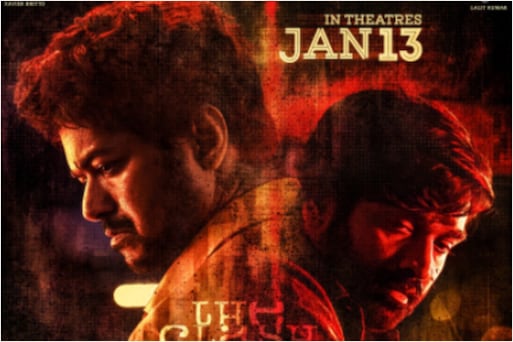 On the occasion of Master release on Wednesday, Ajith fans took to social media to start a negative trend with the hashtag 'Master Disaster'.

Master, starring Tamil superstars Thalapathy Vijay and Vijay Sethupathi, could well be on its way to create a record at the box office despite opening amid the pandemic and being leaked on torrent websites hours before its release. Fans of the two actors started crowding at theatres since early morning on Wednesday for the opening show of the film, which has released on the big screen despite Covid pandemic.

Vijay starrer Master has finally released on the occasion of Pongal. While Vijay will look to set his box office record straight post mixed response to his last release Bigil, another reason that expectations are high from Master is that if it does well at the ticket window, other film industries can take cue and prepare for rolling out movies in cinema halls slowly by Holi.

A still of Malayalam actor Dileep who was seen attending the premiere of Vijay's Master. 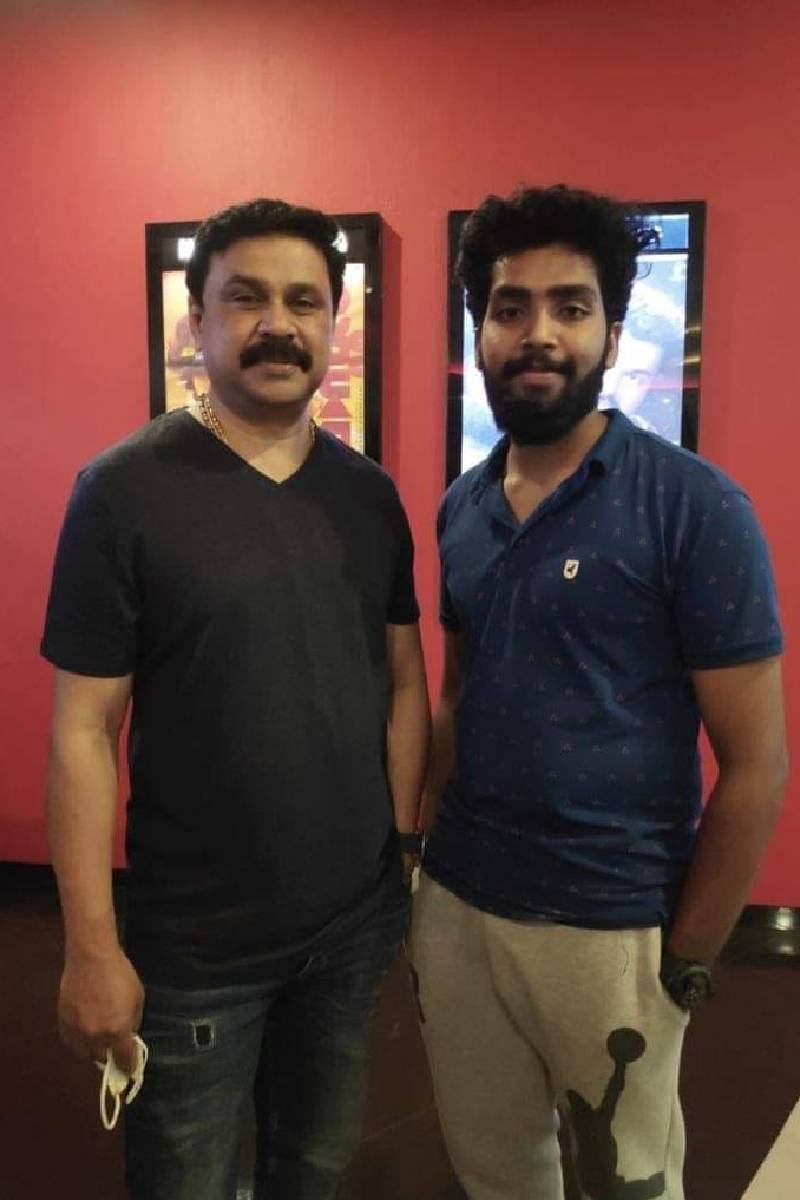 Film trade analyst Taran Adarsh shared that Vijay's Master had a strong opening at the box office. Taking to Twitter he mentioned that the film is having a 'fantabulous start'.

It's a #Tsunami at the #BO... #MasterFilm has a FANTABULOUS START... Only goes to prove *yet again*: Give the audience what THEY want to watch and they will never disappoint you... Charm of watching a wellmade entertainer on big screen will never diminish. #Master #MasterPongal pic.twitter.com/2dwgyROAmn

A still of fans celebrating the release of Vijay's master. 'Thalapathy' Vijay comes together with 'Makkal Selvan' Vijay Sethupathi in the highly-anticipated film Master, helmed by Lokesh Kanagaraj. Here are some powerful stills from the film. 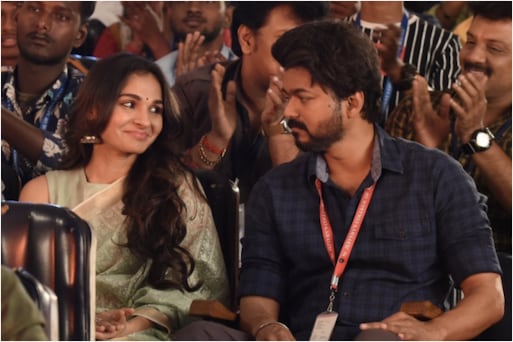 Slated to release on January 13, Vijay’s much-awaited film Master has been leaked on the internet.

Master is probably the first potential blockbuster since coronavirus scare closed off theaters. Although Hollywood blockbusters like Tenet and Wonder Woman 1984 have released by year end, for the Hindi film industry, hopes are really pinned on Vijay's Master to revive the business of cinema halls. Master makers did not opt for OTT release and have made the bold move of releasing the film in cinema halls even though Covid-19 vaccines have not yet been made available to larger public. Now, if Master does well, Bollywood can take cue and line up big films like Sooryavanshi and '83 for release around Holi and there on.

Vijay fans celebrated outside Carnival Cinemas in Wadala, Mumbai as his film Master released on the occasion of Pongal. They also distributed hand sanitisers and saplings with posters of Master on the bottles and pots.

Maharashtra: Fans of actor Vijay celebrate outside Carnival Cinemas in Wadala, Mumbai as his film 'Master' releases today. They also distributed hand sanitisers and saplings with posters of 'Master' on the bottles and pots. pic.twitter.com/M0XysSZHOS

Actress Keerthy Suresh headed to a cinema hall to watch Master. "Can’t even describe how ecstatic it feels to be back at a theatre after waiting for a whole year, and what’s even better? It’s for #Master (sic)," she shared on social media.

Can’t even describe how ecstatic it feels to be back at a theatre after waiting for a whole year, and what’s even better? It’s for #Master 🔥

Master has released on the occasion of Pongal in Southern India.

Amid serious threat from piracy, director Lokesh Kanagaraj insisted fans to not share leaked videos and clips from Master. He wrote on social media hours before the film's theatrical release, "It's been a 1.5 year long struggle to bring Master to u. All we have is hope that you'll enjoy it in theatres. If u come across leaked clips from the movie, please don't share it Folded hands Thank u all. Love u all. One more day and #Master is all yours (sic)."

Dear all
It's been a 1.5 year long struggle to bring Master to u. All we have is hope that you'll enjoy it in theatres. If u come across leaked clips from the movie, please don't share it 🙏🏻 Thank u all. Love u all. One more day and #Master is all yours.

Though we have no official reports yet, it has been learnt that Master will be for the duration of about less than 3 hours, to be exact 2 hours 56 minutes. This makes it the longest film of director Lokesh Kanagaraj yet.

While one needs no reason to go see a Vijay film in cinema halls, coronavirus has instilled a fear in us that may prove worrisome. We give you five reasons to enjoy Master in cinema halls.

1. With Vijay and Vijay Sethupathi in lead roles, Master is set to be an out-and-out treat for movie lovers.

2. The final face-off between the two Vijays is a big selling point of the film. Many movie posters and teasers have hinted that their clash will be epic.

3. Anirudh Ravichander's music will be a pull for the audiences in itself. Vaathi Coming, we say.

4. Lokesh Kanagaraj has been a director to look out for since Kaithi released in 2019. He is a young filmmaker with big aspirations.

5. Both Vijays play varying characters in Master and their craft is truly unmatched. Some mass moments will await fans for sure.

Big budget movies have always been a time to head to the theaters. While coronavirus fear still looms large, Master is probably the first potential blockbuster to release in cinema halls. A festive release, couple with a highly anticipated cast can certainly turn the tide in the favour of theater owners and producers who have been waiting to see their movie release in theaters for close to a year now.

Master has a star-studded cast of 'Thalapathy' Vijay with 'Makkal Selvan' Vijay Sethupathi. The two will be seen at loggerheads in the action film. Vijay plays a college professor while Vijay Sethupathi's role has been kept a closely guarded secret. All we know so far is that his character will certainly have negative shades. The biggest selling point of the film will be the clash between Vijay and Vijay Sethupathi. Directed by Lokesh Kanagaraj, Master also features Malavika Mohanan, Arjun Das, Andrea Jeremiah and Shanthanu Bhagyaraj in pivotal roles.

Buzz has been strong for one and a half years as 'Master' finally hits cinema screens on the merry occasion of Pongal. Meanwhile, coronavirus scare still looms large.

Buzz for Master has been high ever since shoot began for the film, which will witness a face off between the two Vijay's with mega fan following. Directed by Lokesh Kanagaraj, Master also features Malavika Mohanan, Arjun Das, Andrea Jeremiah and Shanthanu Bhagyaraj in pivotal roles.

The makers have also planned to release the film dubbed in Hindi on January 14 in cinemas across North India.