Sharing a snap from her visit on her Instagram stories, Mindy revealed her pitstop at Priyanka Chopra's restaurant while she was in New York.

Global icon Priyanka Chopra has made quite a buzz outside India – not only for her films but also for her off-screen projects. Her New York restaurant named Sona, since its launch in 2021, has been the talk of the town with myriad celebrities visiting the eatery. The latest to enjoy a meal at Sona was the Never Have I Ever creator, Mind Kaling. Sharing a snap from her visit on her Instagram stories, Mindy revealed her pitstop at Priyanka’s restaurant while she was in New York for work-related reasons.

Mindy’s partner for the day was her writer friend Akshara, who used to work as Mindy’s assistant earlier. Mindy, in her story, also tagged Priyanka, saying, “Love you.” Talking to her 64 lakh Instagram followers through her post, Mindy mentioned that she had “dreamy dosas, kofta korma, chaat, and so much more.”

In the picture, Mindy is seen showing a peace sign and getting a selfie with Akshara. On their table is a pyramid-shaped Dosa on aesthetic crockery, also by Sona. Take a look: Reacting to her story, Priyanka reposted the picture on her Instagram stories and said, “Love you and your continuous support!” 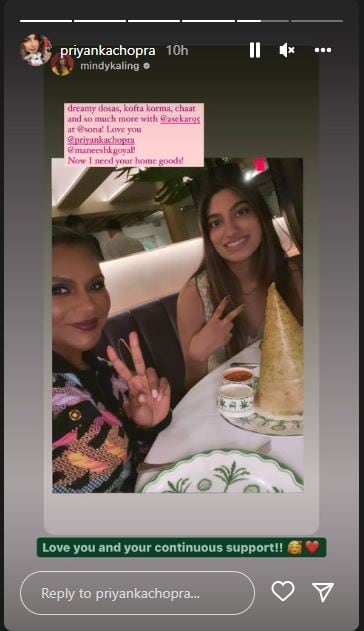