Recently, pregnant Sonam Kapoor indulged in a hilarious banter with her BFF Masaba Gupta on Instagram.

Mom-to-be Sonam Kapoor is setting maternity goals. Every outfit she sports showcasing her baby bump leaves us stunned. Now, she wants her friend and designer Masaba Gupta to design one for her. The actress recently revealed that she has been waiting for Masaba Gupta to make 'baby bump clothes' for her.

Recently, pregnant Sonam indulged in a hilarious banter with her BFF Masaba on Instagram. Sharing pictures of Masaba from a photoshoot on Instagram, the actress wrote, “She’s also not made my baby bump clothes yet! I can’t wait for them anymore…so, I am sucking up to her publicly…Masaba Gupta, where are my clothes?” 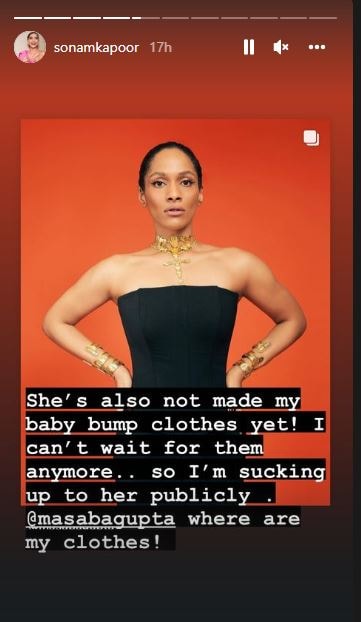 Reacting to Sonam Kapoor's Instagram story, the designer too replied and wrote, “Jesus, take the wheel from our lady Sonam.” Earlier, in a chat with Vogue, Sonam spoke about her pregnancy journey and revealed that it’s been “very tough”. She said: “Your body changes every week, every day, and there are new experiences.”

The actress is soon going to be a mother and is currently enjoying one of the most important phases of her life. In March this year, Sonam took to her Instagram handle and announced her pregnancy through a lovely photoshoot with her husband Anand Ahuja alongside a heartfelt note. After her pregnancy announcement, Sonam has already shared many maternity looks.

On the work front, the mother-to-be was last seen in the 2019 release The Zoya Factor, in which she starred alongside Dulquer Salmaan. Sonam then had a cameo in Anil Kapoor and Anurag Kashyap’s AK vs AK, which released on Netflix in 2020. Sonam Kapoor will next be seen in Blind, which will also feature Purab Kohli, and Vinay Pathak in supporting roles. The film is a remake of the 2011 Korean film of the same name.