Megastars of South cinema Kamal Haasan and Akkineni Nagarjuna have collaborated with the upcoming sports drama '83's director Kabir Khan to present the Tamil and Telugu versions of the film, respectively. 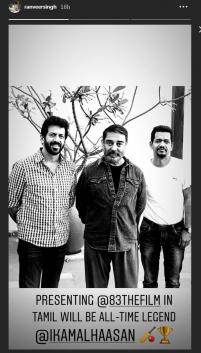 The makers of the film have announced that Kamal Haasan's production house, Raaj Kamal Films International, in association with Reliance Entertainment, will present '83 in Tamil Nadu. Meanwhile, Nagarjuna's production house, Annapurna Studios, will distribute the film in Andhra Pradesh and Telangana.

In an interview with India Today, Kamal Haasan gave an insight into the collaboration. He said, "It's a matter of pride to promote the film that will recreate the moments of the iconic matches. I am happy to bring to my people the story of the team of inspired men captained by Kapil Dev who fought against all odds and won India's greatest sporting triumph."