Riddhima shared a few pictures of herself in her new haircut on her Instagram stories and thanked her 'supermom' Neetu Kapoor.

Neetu Kapoor turned a hairstylist for her daughter Riddhima Kapoor Sahni, who has been quarantining with her at their Pali Hill residence in Mumbai ever since Rishi Kapoor passed away last month.

Riddhima shared a few pictures of herself in her new haircut on her Instagram stories and thanked her mother. In one of the pictures, Riddhima wrote, "When mum is a pro in haircut," and hashtagged the picture with "supermom." In another picture, Riddhima wrote, "Thanks mom" and dropped a heart emoticon. Take a look at Riddhima Kapoor Sahni's new look here: 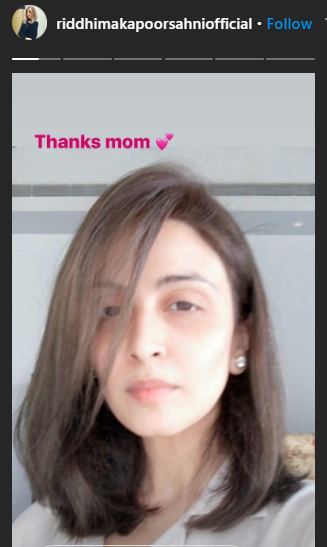 Recently, Ranbir Kapoor gave Alia Bhatt a haircut amid the lockdown. Alia had posted a picture of her new look on Instagram earlier this week and shared how she has evolved into a fitter person after working out at home during the lockdown.

“60 days later - stronger, fitter, better at burpees, much better at skips, much much better at push ups, obsessed with running, super obsessed with eating right and waiting to get back onto the next challenge. P.S - Yes I cut my hair AT HOME - thanks to my multitalented loved one who rose to the occasion when I was in need of a chop chop," she wrote.

Rishi Kapoor was diagnosed with cancer in 2018 and he underwent a treatment in the US for the same. However, the cancer was reportedly said to have relapsed and the actor breathed his last at a Mumbai hospital on April 30. The news of his death came a day after the shocking demise of Bollywood’s talented actor Irrfan Khan.