Nia Sharma set internet on fire with a sexy slow-motion video on the beach where she wore a white bikini.

Nia Sharma, one of the hottest beauties of Indian telly-town, has posted a stunningly sensual reel video on Instagram. Nia has set the internet ablaze with her stylish articulations. The actress can be seen dressed in a white bikini and is playing on the beach on an island. The background soundtrack for the slow-mo reel is one of Atif Aslam’s popular songs, “Wo Lamhe."

She seems in vogue in this post embellishing her clothing with a golden charm neckpiece and a flower tucked behind her ear and her beachy waved hair. Nia’s style is quite well known for consistently astonishing everyone. Nia always makes anything she wears seem so astounding with her own quirky twist, whether she’s acing classic avatars or daring bikini outfits. Her admirers and industry pals frequently leave nice comments on such posts.

Nia recently appeared in the song “Tum bewafa ho" with Arjun Bijlani and Soumya Joshi. The song, sung by Payal Dev and Stebin Ben, is all about love and heartache.

In mid-February, Arjun and Nia filmed for Tum Bewafa Ho in Himachal Pradesh. They both posted photos and videos from their collaboration on their social media accounts. The song has just reached 50 million views on YouTube. Nia expressed gratitude to everyone who congratulated her through Instagram stories. 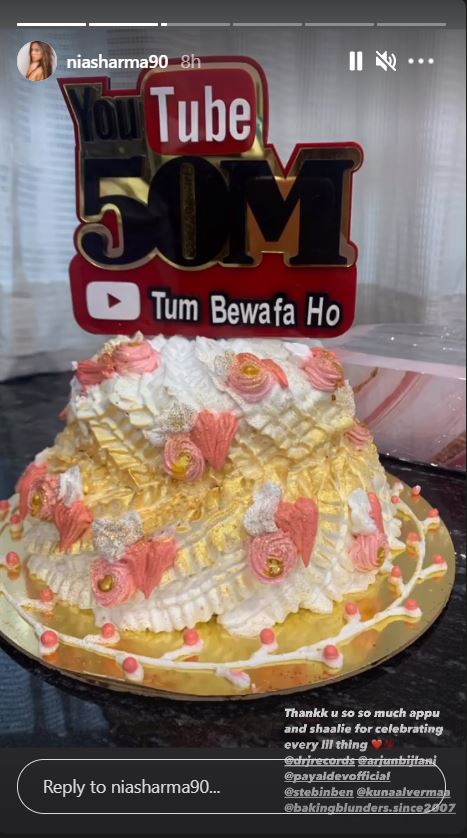 She recently starred in season two of the online series “Jamai 2.0," alongside Ravi Dubey and Achint Kaur. The actress gained to prominence in series like “Kaali: Ek Agnipariksha," “Ek Hazaaron Mein Meri Behna Hai," and “Jamai Raja." For the unenlightened, she had also been ranked 3rd and 2nd in a British-based newspaper’s Top 50 Sexiest Asian Women list in 2016 and 2017, respectively. She is also one of the most popular celebrities on social media, where she frequently posts stunning photographs of herself.