Nushrat Bharucha took a small vacation break after the success of her last movie 'Dream Girl'. The actress posted some bikini-clad pictures of herself, enjoying by the beach.

Rising high on the success of her last movie Dream Girl, actress Nushrat Bharucha has taken some time off to have a small vacation break. And what better excuse than your best friend’s bachelorette? The actress has took off to Thailand and is having a great time with her girl gang and her pictures are proof of the same.

On vacation, Nushrat wore a white Aztec-print two piece bikini and shared some lively pictures of herself on the beach. She made it even more stylish with a pair of round sunglasses. In one of the pictures, she also flaunted her thigh tattoo.

Later, she coincidentally also met TV and film producer Ekta Kapoor on a flight. Nushrat also posted videos of the chance encounter on Instagram as both were surprised to see each other on the flight. Ekta funnily asks Nushrat to give her her metabolism. They even talk about Nushrat's Thai vacay, which has turned out to be a trend on social media. 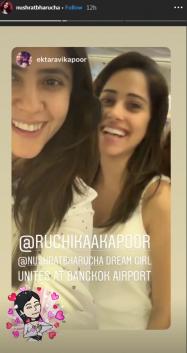 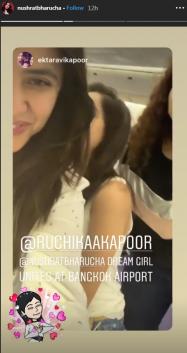 Reportedly, the actress has taken a week off and will complete her schedule for Rajkummar Rao-starrer Turram Khan once she is back in town. Nushrat and Rajkummar have worked together in the movie Love, Sex Aur Dokha previously. Asking how it was collaborating with him once again after so long, she said, “. It was like meeting an old friend and working together after so many years when we are at different points in our careers. We are wiser, calmer and both at a great place in life.

Next in line, she has Hurdang with Sunny Kaushal and Vijay Varma which is a love story set in the ’90’s and will come out next year.