Parasite has emerged as one of the biggest winners in Oscars 2020, The Korean film has won four Academy Awards so far and Bong Joon ho has been declared as the best director.

The Academy Awards, the highest honours in the Hollywood, were handed out on Sunday (Monday morning in India) at a ceremony in Los Angles at the Dolby Theatre. As popular names of the industry came together viewers across the globe waited with bated breath to know if their favourite actor, actress, film or technicians won an Oscar.

Parasite emerged as the biggest winner at the 92nd Academy Awards. The Korean film won four Oscars, including Best Picture, Best Director, Best International Feature Film and Best Original Screenplay. While Joaquin Phoenix took home the trophy for Best Actor in a Leading role, Renee Zellweger was honoured in the Best Actress in a Leading Role at Oscar 2020. Brad Pitt won the 92nd Academy Award for Best Actor in a Supporting Role and Laura Dern defeated Scarlett Johansson to bag the Best Actress in a Supporting Role category.

In addition to making history in the night’s most prestigious category, Parasite's win becomes even more special for the team as it is the first South Korean film to ever be nominated for an Oscar. However, this wasn't an easy run for it. The film was fighting in top categories with the likes of Once Upon a Time in Hollywood, 1917, Marriage Story and The Irishman among others. 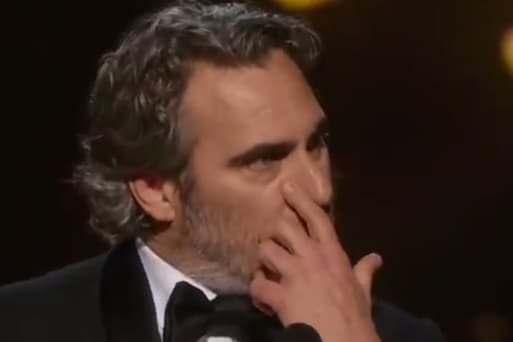 Joaquin Phoenix took home the Best Actor award at Oscars 2020 for his performance in 'Joker'. During the acceptance speech, he recalled the song lyrics by his late brother River Phoenix. The latest winners at the 92nd Academy Awards, which were held at the Dolby Theatre: Best supporting actor: Brad Pitt, "Once Upon a Time ...

Jane Fonda announced Parasite as the Best Picture of the year at Oscars 2020. Competing against Ford Vs Ferrari, The Irishman, Jojo Rabbit, Joker, Little Women, Marriage Story, 1917, Once Upon a Time in Hollywood and Parasite, took home the 92nd Academy Award.

Renee Zellweger wins her second Oscar. Tonight she was honoured with Academy Award in Best Actress in a Leading Role. The award was presented to her by last year's Oscar winner Rami Malik.

Joaquin Phoenix has been one of the most talked about actors for the category. Despite the critical backlash against the film he won his is his first Academy Award and his fourth nomination. He is the second actor to be recognised by the academy for a role based on this comic-book character. In 2009, Heath Ledger posthumously won supporting actor for playing Joker in The Dark Knight.

Steven Spielberg remembers the talents gone by. In a heartfelt rendition of Yesterday, Billie Eilish pays tribute to the artists Hollywood lost in 2019.

Oscar for Best Director goes to Bong Joon Ho for Parasite. This is the third award for the film.

After some startling performances at the Oscars stage, Elton John was announced as the winner in Best Original Song category for (I'm Gonna) Love Me again from Rocketman.

Joker gets it's first Oscar in  Best Original Score category. The award was presented by Gal Gadot, Brie Larson and Sigourney Weaver.

A few words from a winner… #Oscars pic.twitter.com/Ex81XpseF3

Elton John sings and plays (I'm Gonna) Love Me again from Rocketman. The song is one of the nominees in the Best Original Song category.

Parasite takes home the award for Best International Feature film. It is their second award tonight. Nominees Renée Zellweger and Scarlett Johansson turned up in white ensembles at the red carpet, while Regina King caught attention with her glittering gown.

The Oscar for Makeup and Hairstyling goes to Bombshell. It is an American biographical drama starring Charlize Theron, Nicole Kidman and John Lithgow.

Rebel Wilson and James Corden announce 1917 as the winner in Best Visual Effects category. It was competeing against the likes of Avengers: Endgame, Star Wars: The Rise of the Skywalker, The Lion King and The Irishman.

Cynthia Ervio takes the centre stage to perform her song Stand Up from Harriet. The song is one of the nominees in the Original Song category.

Julia Reichert on being a female filmmaker winner tonight: "It's not being part of the boys’ club. Sisterhood." She won the Oscar for American Factory in Documentary Feature category.

Congrats to Julia and Steven, the filmmakers behind American Factory, for telling such a complex, moving story about the very human consequences of wrenching economic change. Glad to see two talented and downright good people take home the Oscar for Higher Ground’s first release. https://t.co/W4AZ68iWoY

Ford Vs Ferrari is the winner of Best Film Editing. The film also won the Oscar for Sound Editing.

Roger Deakins took home the award for Best Cinematography for his film 1917. It is his second Oscar and 15th nomination.

A quick recap of the Academy Awards so far: 1917 won the Academy Award 2020 for Best Sound Mixing. Other nominated films were Ad Astra, Ford Vs Ferrari, Joker, Once Upon a Time Hollywood.

Ford Vs Ferrari wins Oscars for Sound Editing. The film was pitied against 1917, Star Wars: the Rise of skywalker, Joker and Once Upon a Time in Hollywood.

Eminem takes the Oscar stage as he enthrals the audience with a power-packed performance. The nominees, winners and guests sitting in the audience sang with him as he rapped his popular number Lose Yourself.

Laura Dern dedicated her Oscar to her parents.

A few words from a winner… #Oscars pic.twitter.com/ejhGA2sbRd

Mahershala Ali gives away the award for Best Actress in Supporting Role to Laura Dern for her role in Marriage Story. The Actress raced ahead of Scarlett Johansson, Kathy Bates, Margot Robbie and Florence Pugh.

Parasite had a proud moment as it was the first time a South Korean film made it to the Oscars winning list. However, this wasn't an easy run for it. The film was fighting in top categories with the likes of Once Upon a Time in Hollywood, 1917, Marriage Story and The Irishman among others.

Bong Joon Ho won in the Best Director category competing against some big names like Martin Scorsese, Sam Mendes, Quentin Tarantino. In addition to making history in the night’s most prestigious category, Parasite's win becomes even more special for the team as it is the first South Korean film to ever be nominated for an Oscar.

The ceremony was laced with performances from Idina Menzel, Billie Eilish, Cynthia Erivo and John Elton Also, Eminem's surprise performance at the awards ceremony took the netizens by surprise.