Karni Sena Chief has refused to back down and says that protest will now happen in states where the film is not banned. Out of fear, Gujarat theatre owners have refused to screen the film anywhere in the state. The fringe outfit has already blocked Delhi-Jaipur highway, creating disruption in law and order.

A day before the release of Padmaavat, Rajput group Karni Sena has intensified protests against the film. Violence has been reported from four states – Haryana, Rajasthan, Gujarat and Uttar Pradesh. The group’s chief Lokendra Singh Kalvi has refused to back down and says that the protest will continue in states where the film is not banned yet. Out of fear, Gujarat theatre owners have refused to screen the film anywhere in the state. Some theatre owners in Delhi-NCR are also considering following suit. The outfit has already blocked Delhi-Jaipur highway, disrupting the law and order. In Rajasthan, Chittorgarh Fort has been closed as a mark of protest against the release. Slamming the central and state governments, Delhi CM Arvind Kejriwal says that if the government can’t ensure the safety of a film in their respective states, how can they expect investors to invest in a business there. Padmaavat has been passed with a U/A certificate after five modifications and a title change. Earlier, various states government banned the film, however, the makers knocked on the doors of SC where the ruling came in their favour. SC asked the states to lift the ban and rejected their petition to review the decision. However, Karni Sena doesn’t seem convinced with the verdict. The Supreme Court has now decided to hear another plea banning some scenes on Monday.

West Bengal Chief Minister Mamata Banerjee says she will be happy if "Padmaavat" is screened in the state and appealed for peace. She said that the Supreme Court has given its order and "we must respect it". "It is a film. The name of the film has also been changed. The states where trouble broke out are ruled by BJP," she told reporters at the state secretariat. "Rajasthan and Uttar Pradesh have to maintain law and order. It is their duty. They can talk to them, they can convince them if anybody is around (to create trouble). I will be happy if the film 'Padmaavat' is screened here. Peace prevails in our state", she said.

Whatever is happening is unfortunate, but now even I cannot stop the fire raging in our hearts from expressing itself out on to the streets. Do not fan the fire in our hearts. The fire from Jauhar will burn everything. We stopped Padmavati and now we will stop Padmaavat too. The nation will burn, do not commit this sin: Karni Sena chief

Section 144 imposed in district. It'll be in effect till January 28. Executive Magistrates & police forces have been deployed at sensitive places. We've appealed people to protest peacefully, if they must. No order to close schools, colleges and bars: Vinay Pratap Singh, DM 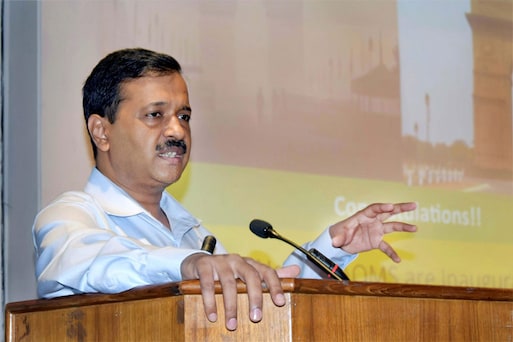 Fringe group activists have targeted a cinema hall in Jammu. The broke window panes and allegedly tried to burn a ticketing counter. Authorities were holding a meeting with activists of Yuva Rajput Sabha and other groups to ensure that there was no law and order problems due to the screening of the movie.

Law and order situation is under control. At some places, people tried to take law in their hands, situation has been controlled promptly and action has been initiated against the hooligans: Mohd. Akil, ADGP, Law & Order, Haryana.

Gurugram’s GD Goenka School, whose bus was attacked by protesters on Sohna Road in the afternoon, has decided to shut the school tomorrow, fearing more violence. Protesters had pelted stones on the bus that was carrying children as young as 4-5 years old.

As violent protests against spread, the Multiplex Association of India said on Wednesday its members would not screen the period drama in Rajasthan, Gujarat, Madhya Pradesh and Goa. The decision of the association, which represents about 75 per cent of the multiplex owners in the country, came as Rajput outfits and other fringe elements vandalised malls, burned vehicles, and issued open threats to theatre owners and public in their bid to stall its release, claiming distortion of history.

Haryana: Security forces deployed outside INOX Gurgaon Dreamz in #Gurugram ahead of the release of #Padmavaat tomorrow. pic.twitter.com/sJFuuvw3CE

GURUGRAM: The Karni Sena goons protesting against the release of the film did not even spare little children and attacked the bus of GD Goenka School in Gurugram. In a video that has surfaced, the protesters can be seen hurling stones at the bus near Sohna Road on Wednesday afternoon. Parvesh Kumar, the bus driver, told News 18 that around 10-15 school kids as young as 4-5 years old were in the bus at the time of the attack. The attendants in the bus said that there were cops nearby but they failed to control the situation. The attendants made the students duck and covered them to protect them from the attack. In the video, the scared children can be seen crying. According to eyewitnesses, pieces of broken glass fell on the head of some children, injuring them.

DELHI-NCR: Many multiplexes in Delhi-NCR are considering cancelling shows of Padmaavat after the violent stir by members of the Rajput Karni Sena. Movietime cinema in Greater Noida has already decided to cancel a show on Friday evening that was fully booked online. Several theatres in Rohini, Delhi, are also considering stopping shows.

Gurgaon Deputy Commissioner Vinay Pratap Singh denied reports that bars and pubs have been shut down in the city in the wake of violent protests ahead of the film's release. "We have already imposed (prohibitory orders under) Section 144 of the CrPC in the city but not directed pubs and bars to shut. All pubs and bars will remain open. The police are undertaking adequate patrolling," Singh said.

MATHURA: Alleged members of the Shree Rajput Karni Sena on Wednesday blocked the Mathura-Agra route of the North Central Railway at Bhuteshwar station for about 10 minutes as a mark of protest against the release of Sanjay Leela Bhansali's historical drama Padmavaat on January 25. According to RP Inspector Gaurav Kumar Sharma, the agitators blocked a passenger train between Delhi and Mathura, for over 10 minutes at Bhuteshwar station in Mathura district. The train already has a scheduled stoppage of 10 minutes and the blockage added to a 10-minute delay, Sharma said.

NASHIK: Police on Wednesday detained around 20 activists of the Karni Sena for protesting against the controversial film. A leader of the Rajput organisation on Tuesday threatened that the activists would take a 'jal samadhi' (drown themselves) in the Gangapur dam and if the police arrests them, they will not seek bail. As the protesters gathered near the Gangapur dam, they were detained, Nashik taluka police station inspector Babasaheb Thombe said.

Many multiplexes in Delhi-NCR are considering cancelling shows of Padmaavat after the violent stir by members of the Rajput Karni Sena. Movietime cinema in Greater Noida has already decided to cancel a show on Friday evening that was fully booked online. Several theatres in Rohini, Delhi, are also considering stopping shows.

According to the poem Padmavat, Khilji led the invasion motivated by his desire to capture the beautiful queen Rani Padmini, the wife of Rana Rawal Ratan Singh, the ruler of Mewar. However, Rani Padmini sacrificed herself even before Khilji could enter her fort. 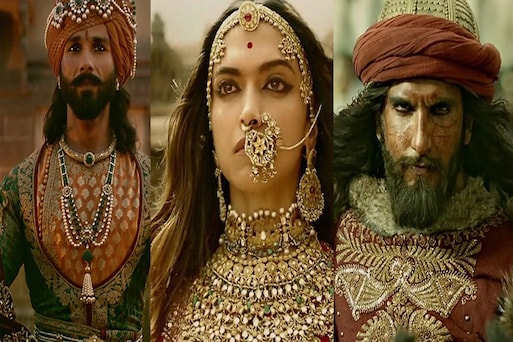 While Ranveer's Khilji looks like a maniac obsessed to take over the entire country, Shahid's Ratan Singh is calm, dignified and in awe of the beauty and grace of a stranger he met in a jungle.

Keeping the community's sentiments in mind, CBFC suggested the makers to redo the song 'Ghoomar' from the film, covering Rani Padmavati's exposed midriff. A decision ridiculed by many.

These are further images from the violence on Gurugram's Sohna Road

After torching buses in Gurugram, Karni Sena protestors have gathered around PVR Rohini protesting against the release of Sanjay Leela Bhansali's Padmaavat. Interestingly, Delhi CM Arvind Kejriwal has slammed the central and various state governments for not ensuring safety for the film.

After months of fuelling controversies, Sanjay Leela Bhansali must have heaved a sigh of relief last night when the much-anticipated film Padmaavat finally got a thumbs up from the Shri Rajput Karni Sena. A special screening was held last night wherein the cast and crew of the film turned up in large numbers. The film has been mired in controversies ever since its inception and it's only now, that the film is set to see the light of the day for the common public.

Karni Sena Goons Go on a Rampage in Gurugram, Torch Buses: A bus has been set ablaze on the Gurugram's Sohna Road, not too far from the country's capital. Goons who allegedly started the fire, are also pelting Haryana police officials with stones while also not allowing fire engines to approach or extinguish the vehicle on fire.

See the damage allegedly inflicted by protesters outside Meerut's PVS Mall. The authorities are currently investigating the incident.

Rajasthan Home Minister Gulab Chand Kataria, says, "We've appealed protesters that if they want to protest while being within framework of law & order, they can go ahead with it. As a matter of fact, there aren't many cinema halls in Rajasthan who're ready to screen the film"

We've appealed protesters that if they want to protest while being within framework of law & order, they can go ahead with it. As a matter of fact, there aren't many cinema halls in Rajasthan who're ready to screen the film: Gulab Chand Kataria,Rajasthan Home Minister #Padmavaat pic.twitter.com/beSCxAG53i

Protests against Padmaavat take place outside Wave cinemas in Lucknow MEERUT: Stones pelted at PVS Mall, allegedly in protest against the screening of 'Padmaavat'. Police have been deployed on the spot and an investigation into the incident is underway.

The Karni Sena continues to flaunt its defiance of the Supreme Court ruling, in the face of State and Union government inaction. The Karni Sena chief has asked for a 'public-imposed bandh' on the screening of the film.

Protesters attacked a school bus on Sohna Road in Gurugram.