Prabhas penned a sweet note for Adipurush co-star Saif Ali Khan on his birthday. The Bollywood actor turned 52 on Tuesday and Prabhas shared a picture of the actor on his Instagram Stories along with his wish.

“Happy Birthday #SaifAliKhan sir! Have the best year ahead!!! Can’t wait for the world to witness your breathtaking performance in #Adipurush,” Prabhas wrote. 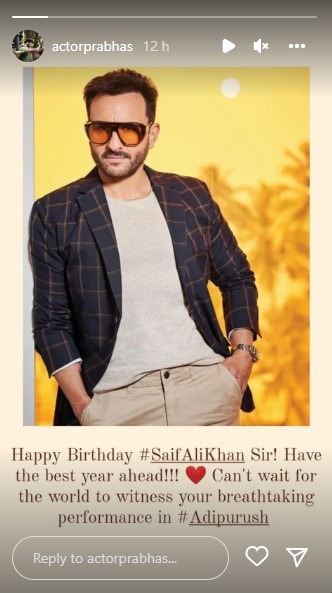 The film is produced by T-series and Retrophiles. Prabhas will portray the character of Ram, along with Bollywood Kriti Sanon, who will be playing the role of Sita. The movie also features Sunny Singh in the role of Laxman. Bollywood star Saif Ali Khan will be seen as Ravana. Sonal Chauhan has also joined the cast of the film.

Besides Adipurush, Prabhas has been busy with the making of Project K with Deepika Padukone and Salaar with KGF director Prashanth Neel.

As for Saif, the actor had a low-key birthday celebration at home. Kareena Kapoor, Soha Ali Khan and Saba Ali Khan shared pictures from the at-home bash earlier in the day. The birthday bash was attended by Saif, Kareena Kapoor Khan, their kids Taimur and Jeh, Soha, Kunal and Saif’s elder son Ibrahim Ali Khan. Now, Kareena took to Instagram to drop a photo of her ‘gang of boys’ and the internet is loving it.

Sharing a photo of Saif, with his three sons Ibrahim, Taimur and Jeh, Kareena wrote, “Can you find a better looking gang of boys?Hmmmmmmmmm♥️♥️♥️♥️♥️#Saifu@______iak______ ,Tim and Jeh baba ♥️”