It’s a moment of triple celebration for actress Priyanka Chopra as she is celebrating her parents-in-law’s wedding anniversary, brother-in-law Joe Jonas’ birthday, and 75 years of India’s Independence altogether. The global icon, who often uses social media to give fans candid glimpses of her life, also took to Instagram to send warm wishes to her family members. On her Instagram story, she shared a rare romantic photo of Nick Jonas’ parents. In the picture, Paul Jonas is seen keeping Denise Miller-Jonas close as the couple warmly hug each other.

With contagious smiles on their faces, the duo appears to be mad in love as the camera captures them together. Priyanka, while sharing the picture online wrote, “Happy anniversary to the loveliest couple!” before finishing her caption with a slew of heart emoticons. 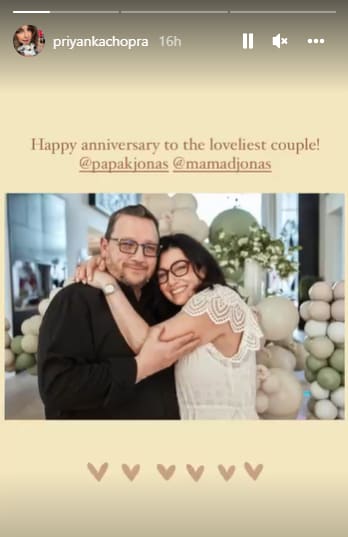 In a subsequent story, Priyanka also sent her wishes to brother-in-law Joe Jonas on the special occasion of his birthday. She used an artistic photo of the popular musician to deliver her warm tribute. While wishing Joe Jonas, Priyanka said, “Happy Birthday Joe Jonas. Lots of love,” before ending her note with a red balloon emoticon. In addition to this, she also used multiple heart emojis to express her love for Joe Jonas.

To mark the 75 years of India’s Independence, Priyanka Chopra shared a patriotic reel that included a cut-out of an old Indian article that announced the end of the British reign in India. With Vande Mataram playing in the background, the reel also featured a monochrome as well as colourful snippets of the Indian flag hoisting at what appears to be the Red Fort. While sharing the video on Instagram, Priyanka said, “Celebrating 75 years of freedom…Happy Independence Day.”

On the professional front, Priyanka Chopra was last seen essaying the role of Sati in The Matrix Resurrections. She currently has a slew of projects in the pipeline including It’s All Coming Back To Me and the TV series Citadel.