Actress Priyanka Chopra took to Instagram to share a gorgeous selfie from the sets of her upcoming show Citadel.

Actress and global star Priyanka Chopra is currently in London shooting for her upcoming show Citadel. A spy-thriller directed by The Russo Brothers, Citadel stars Priyanka and Game of Thrones fame Richard Madden in lead roles. The actress has often shared pictures from the sets of the show, and on Sunday, she posted a stunning selfie on the photo-sharing app Instagram.

In the picture, Priyanka can be seen flaunting gorgeous curls. The actress can be seen sporting a white top, along with nude make-up. PC captioned the picture with a simple camera emoji, and used the hashtag Citadel to let fans know she is busy at work.

Her husband and singer Nick Jonas who seemed totally mesmerized by the picture, took to the comment section to write, “You’re hot".

This isn’t the only surprise Priyanka had in store for her fans. She took to Instagram Reels to share a stunning video of herself riding a boat in London. She could be seen sporting a casual look, with blue top, black shorts along with a hat and sunglasses. The video gives a glimpse of the gorgeous London sky on a sunny day.

PC also took to Instagram stories to snap of herself in a stunning blue dress by Prabal Gurung. With an asymmetrical hemline, bell sleeves and a corset, the dress is truly a work of art. She has been styled by Law Roach and also sported a Bulgari bag. 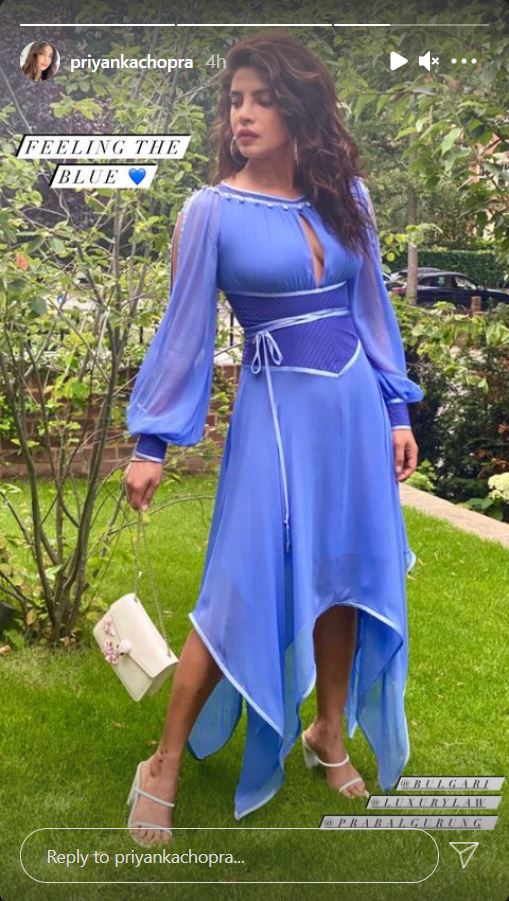 Apart from that, the actress also shared her cousin, Bollywood actress Parineeti Chopra’s story. Parineeti, who was asked if she can beat Priyanka at arm-wrestling wrote, “Naa I think she would beat me (sic)." To this Priyanka wrote, “Y don’t we try it the next time u’re home." On the work front, Priyanka Chopra has also been busy with numerous projects. The actor wrapped her schedule for Matrix 4 and Text For You in London. She will also be seen in an Indian wedding comedy with Mindy Kaling, who is also producing it.