In the video, Priyanka Chopra along with Sophie Turner and Danielle Jonas are seen enthusiastically dancing on 'Sucker'.

Jonas Brother reunited after six years with their single titled 'Sucker'. Days after the release of the track, it debuted at number one on the Billboard Hot 100 and the US Hot Digital Songs chart, with 88,000 copies sold in its first week. The video also featured the J Sisters- Priyanka Chopra, Sophie Turner and Danielle Jonas.

Ever since the song made to Billboard Hot 100 celebrations are in order for Nick and Priyanka. Recently, a video of Priyanka partying in New York is making rounds on the Internet. In the video, the Isn't It Romantic actress along with her J sisters- Sophie and Danielle are seen enthusiastically dancing on the song. The three it a twist by performing the hook step of Priyanka's song 'Gallan Goodiyaan' from the film Dil Dhadakne Do.

Doing Gallan Goodiyaan steps with Sucker @priyankachopra ? 😂❤ that was HOT 🔥

The original video has the Jonas Brothers and their partners go completely whacky in a palatial English estate—there’s dramatic costumes, frenzied parties, Sophie stuffing her mouth with cake, Joe hanging on a wall tied with red ropes, Nick riding a toy sheep, Priyanka suggestively taking down her couture gown and all of them sucking lollypops while bathing in tubs in the open of a plush garden.

Apart from this, the band released their second music video titled Cool. With Nick Jonas making reference to his wedding with Priyanka Chopra in December last year and Joe Jonas mentioning his fiance Sophie Turner's show Game of Thrones, the video can be rightly called 'cool'. Having tinted blue tone and beach shots of Miami, the colourful video takes one back to the Disney days. 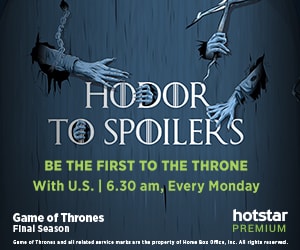