Priyanka Chopra gave a shout out to Cannes winner

Priyanka Chopra gave a shout out to the winners of Cannes 2022 and expressed her happiness on seeing Asian talent getting recognised on the prestigious platform. 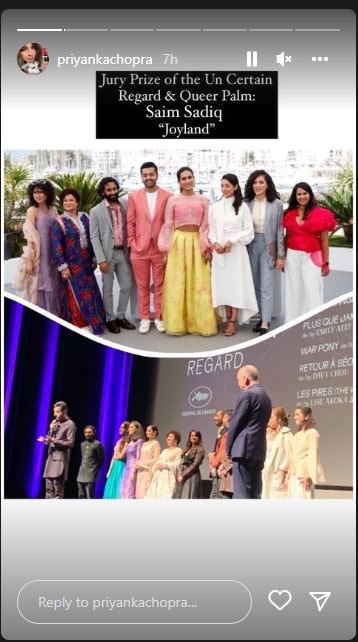 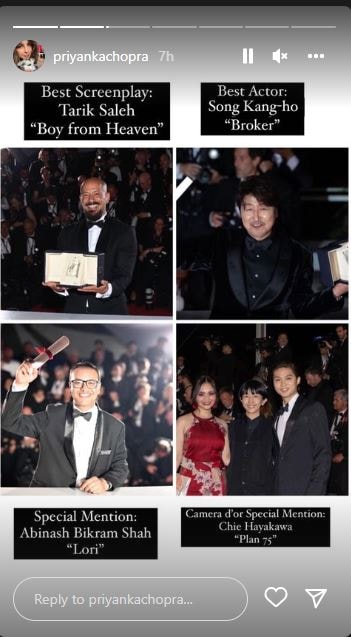 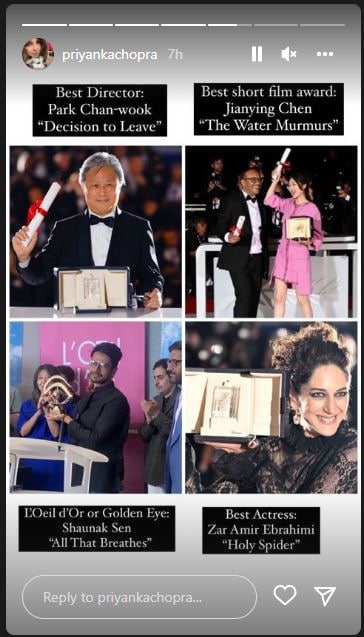 She gave a shoutout to team Joyland as it won the Jury Prize of the UN CERTAIN REGARD. She also mentioned Korean actor Song Kang-ho, director Park Chan-wook, Zar Amir Ebrahimi, and Indian filmmaker Shaunak Sen among many others. India was also the country of honour at the film festival this year. South Korea’s Park Chan-Wook was adjudged the Best Director for his Hitchcockian thriller, Decision to Leave. A cop wakes up when the second husband of a woman he thought was innocent also dies in a mysterious way.

Meanwhile, Shaunak Sen’s “All That Breathes, an audience favourite at Cannes from the outset, won the 2022 L’Oeil d’Or (Golden Eye) for the best documentary at the 75th Cannes Film Festival on Saturday, making it two in succession for India.

This is not the first time Priyanka is being vocal about Asian representation on an international platform. Earlier, she gave a shout out to the series Briderton for having Asian characters in mainstream Hollywood shows.

Talking of Priyanka Chopra, the actress and her singer husband Nick Jonas welcomed their daughter this year via surrogacy.

On the work front, she has a busy schedule ahead. She is currently shooting for Citadel, an Amazon Prime Series that also stars Eternals and Game of Thrones actor Richard Madden. She also has James C. Strouse’s ‘It’s All Coming Back To Me.’ She will appear in the romantic comedy alongside Sam Heughan. Apart from these, the actress will also be making her comeback in Bollywood with Farhan Akhtar’s Jee Le Zaraa. The film also stars Katrina Kaif and Alia Bhatt in lead.