Priyanka Chopra acknowledged the adorable nickname Indians have for her husband Nick Jonas-- National Jiju. Read below for details.

Nick Jonas has been winning hearts of desis ever since he started dating Priyanka Chopra and finally married her in December 2018. The couple has had a blissful year of union and recently Priyanka acknowledged a nickname that Indians have come up with for Nick--National Jiju. In fact, Priyanka also follows a Insta handle by the name of National Jiju/ Nick Bhaiya, which hosts pics of the couple, especially Nick's.

Priyanka has recently wrapped up the shooting of her forthcoming Netflix film The White Tiger and was back with Nick and the Jonas Brothers in Los Angeles. Nick's Hollywood film Jumanji: The Next Level has released worldwide and a scene in the film shows him entering on horseback. The video shared on National Jiju Insta handle has fans cheering as Nick comes in the frame. Some even shout "National Jiju" and "Jijaji aa gaye", referring to Nick.

Priyanka shared the video to her Instagram stories and wrote, "Thank you for all the love".

Jija jee is an icon 🙌🏽 @nickjonas see everyone loves you! #nickjonas #priyankachopra #jumanji 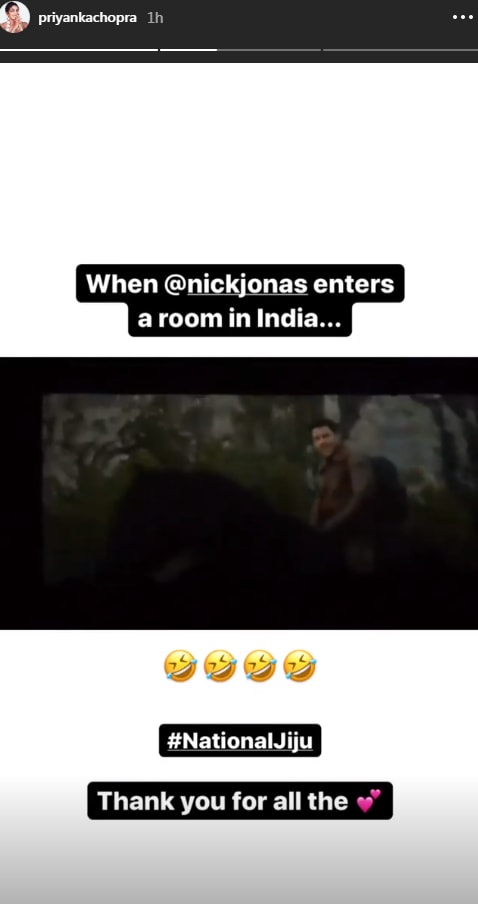 Meanwhile, Priyanka's Netflix film The White Tiger is an adaptation of Aravind Adiga's debut novel of the same name. The novel won Adiga the Man Booker Prize in 2008.

She is also co-producing an Amazon series with Nick, to be based on the couple's wedding sangeet. Her another project is in collaboration with director Robert Rodriguez, which is a superhero movie titled We Can Be Heroes.