After the US Supreme court overturned the landmark Roe vs Wade ruling that guaranteed a constitutional right to abortion, celebrities have been speaking out against the verdict. The ruling will result in abortion being banned in several states. Actress Priyanka Chopra didn’t directly react to the news, she reposted former first lady, Michelle Obama’s post to her Instagram story.

The Baywatch actress expressed her feelings on the recent US Supreme Court decision by re-sharing a heartbreaking statement written by Michelle Obama. 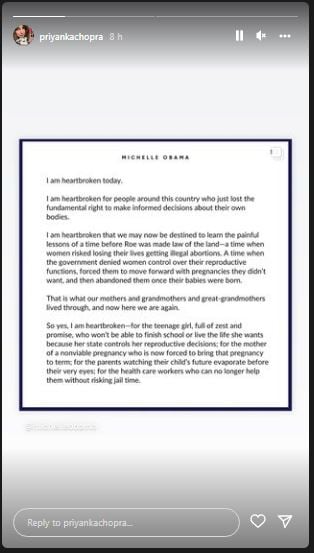 The former first lady, in her statement, wrote how the decision has left her “heartbroken.” She wrote, “So yes, I am heartbroken – for the teenage girl, full of zest and promise, who won’t be able to finish school or live the life she wants because her state controls her reproductive decisions; for the mother of a nonviable pregnancy who is now forced to bring that pregnancy to term; for the parents watching their child’s future evaporate before their very eyes; for the health care workers who can no longer help them without risking jail time.”

Priyanka had also posted another photo featuring a political cartoon. It compared gun rights in America compared to abortion rights. As Roe v Wade was struck down after nearly 50 years since it became one of the significant wins for women’s rights, the current backstep has received a lot of reactions. 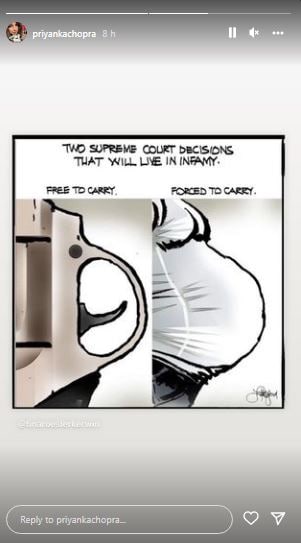 Several Hollywood stars have reacted to the shocking ruling on social media including Hailey Bieber who wrote she was “speechless” as she shared a headline regarding the decision. She further wrote, “What an extreme loss and disappointment. This is really really scary.”

Earlier, Priyanka Chopra launched her another venture in the US after Sona, titled Sona Home. The actress took to social media to share the news and write about her journey.

She also expressed that it was challenging to come to America from India and make it her second home. She began the note by writing, “Launch day is here! I couldn’t be more proud to introduce you all to SONA HOME. It was challenging to come from India and make America my second home, but my journey led me to a place where I found a second family and friends. I bring a piece of India into everything I do and this is an extension of that thought. It’s awesome to be working alongside @maneeshkgoyal and our entire team in creating something so dear to our hearts and heritage.”

Meanwhile, Priyanka has a busy schedule on the work front. She will be seen in Russo Brothers’ Citadel with Game of Thrones alum Richard Madden. She will then be seen in It’s All Coming Back to Me and the Bollywood film Jee Le Zaraa.