Priyanka Chopra shared throwback pictures of her Oscar red carpet looks as she wished all nominees on social media and prepared to watch the awards ceremony.

Priyanka Chopra has shared her enthusiasm for the 92nd Academy Awards, currently underway at the Dolby Theatre in Hollywood, Los Angeles, California. The actress shared throwback pics from the time she attended the coveted awards ceremony in 2016 and 2017.

Priyanka also shared congratulatory messages for all the Oscars 2020 nominees and also asked fans to suggest which film was going to take home the Oscars 2020 trophy in the best film category.

A little #throwback to my Oscars looks. ✨ Which one was your favorite?," wrote Priyanka as she shared throwback picsof her Oscars look. Check out the post shared by Priyanka in the lead up to the 92nd Oscars ceremony below:

A little #throwback to my Oscars looks. ✨ Which one was your favorite? #Oscars2020 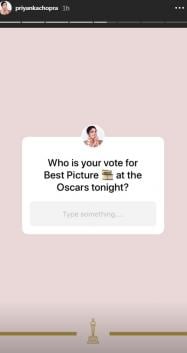 Meanwhile, heavy rain marred the start of the Oscars, sending workers scurrying to hold off leaks on the red carpet as Hollywood’s biggest night got underway.

Brad Pitt, Elton John, Charlize Theron, Leonardo DiCaprio, Scarlett Johansson and Martin Scorsese are among the A-List nominees, alongside the little-known cast of Korean-language drama Parasite, which threatens to steal the thunder from Hollywood’s biggest names.