Ranveer Singh’s style statement has changed dramatically since he made his debut. Known for his bold sartorial and eccentric choices, the actor’s unconventional style has garnered the attention it deserves. Oversized silhouettes to skirts to printed suits, to kurtas to knee-length pants -there is hardly an outfit that Ranveer cannot sport with elan. In 2019, he was honoured with the title of the Most Stylish Man at the GQ Style & Culture Awards. There is no shred of doubt that the actor has always impressed with his style game, regardless of his choice of outfit.

In today’s edition, we break down one of Ranveer’s latest Instagram posts. The black-and-white snapshot is a moment frozen in time. Seems like the lens caught the actor during a dialogue. Ranveer looks dapper in the gentleman-ly appeal. Dressed in statement shirt and pants, the actor grabs attention with his rare neat kempt hair. Sitting on a chair, Ranveer lets the camera take his side profile as he fixes an unmissable gaze. He captioned the picture with a joker emoji.

Recently, Ranveer posted a series of snaps on his Instagram Stories. Initially, he shared a couple of pictures taken during a dance rehearsal. He wore a purple oversized tee paired with vibrant yellow track pants. He also flaunted his special Joker inspired socks. Ranveer also added a few selfies, that he kept posting on Instagram through the night. 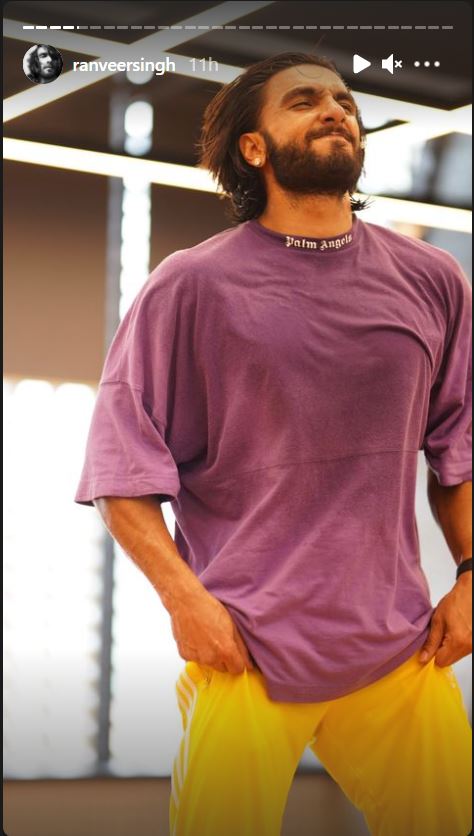 The singer recently performed at singer Shrey Singhal’s pre-wedding bash held in Delhi. The list of performers at the party hosted by Ranveer included Janhvi Kapoor and rapper Badshah.

Ranveer has also stepped into the television medium with the latest trivia based game show called The Big Picture. Meanwhile, on the work front, Ranveer will soon be seen in Kabir Khan’s film 83. He will be seen essaying the role of legendary cricketer Kapil Dev in the sports drama. The movie is based on the 1983 cricket world cup victory of the Indian cricket team. He also has Diyang Thakkar’s Jayeshbhai Jordaar and Rohit Shetty’s Cirkus in the pipeline.