Ranveer Singh, Kapil Sharma Exude ‘So Much Energy’ on the Sets of TKSS, See Pics

Ranveer Singh will be making his appearance on The Kapil Sharma Show to promote his upcoming film Jayeshbhai Jordaar.

Bollywood actor Ranveer Singh will soon be making his appearance in the upcoming episode of The Kapil Sharma Show. In his latest Instagram post, the stand-up comedian was spotted with Ranveer. Both Kapil and Ranveer posed for the camera wearing their best smiles. Kapil was spotted in a brown jacket over a printed orange shirt, while Ranveer was seen in a vibrant printed shirt along with a white hat. Sharing the pictures on the social media platform, the comedian wrote in the caption, “Uffffff so much energy on set, just because of my bro the superstar Ranveer Singh. Jayeshbhai Jordaar. Coming soon. The Kapil Sharma Show.”

Ranveer will be promoting his upcoming film Jayeshbhai Jordaar on The Kapil Sharma Show. The film, marking the directorial debut of Divyang Thakkar, stars Ranveer as a docile son of a strict Gujarati rural family. The social comedy-drama also stars Shalini Pandey as Ranveer’s wife who is expecting a child. Produced by Yash Raj Films, Jayeshbhai Jordaar also stars Boman Irani, Ratna Pathak Shah and Deeksha Joshi. From the trailer of the movie, we can see how the film highlights the issue of gender discrimination and the desire to have a son shared by the elders of a family. Faced with the pressure of having a son, Ranveer and Shalini’s characters run away from their household to have their child in a more liberal society. However, the couple faces several obstacles as shown in the trailer. The movie is slated to release on May 13. 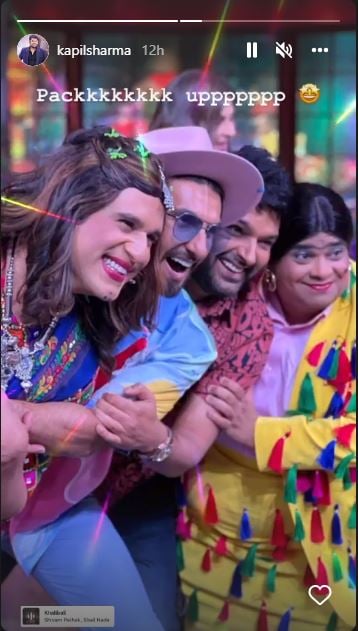