In the monochromatic picture shared on his Instagram stories, Ranveer Singh can be seen hugging Arjun Kapoor and giving a peck on him on the cheeks.

When it comes to friendship in Bollywood, some actors set the par real high and give us major goals. One of them being actor Arjun Kapoor and Ranveer Singh’s friendship, the goofiest one in tinsel town. And recently, the duo seemed to have a gala time with each other. Taking to social media, Ranveer gave a glimpse of his reunion with Arjun on Wednesday.

In the monochromatic picture shared on his Instagram stories, Ranveer can be seen hugging Arjun and giving a peck on him on the cheeks. Along with the picture, he wrote, ‘Bharat Milaap’, and dropped a couple of emojis. He also used the title track of Arjun’s latest film Sandeep and Pinky Faraar in his story. Arjun reshared the photo on his Instagram stories. 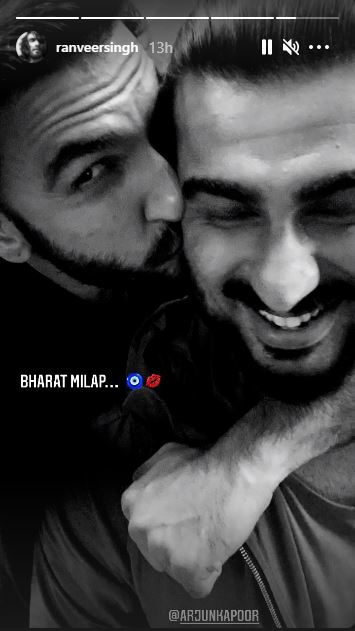 Their friendship kickstarted in Ali Abbas Zafar’s 2014 action film Gunday which showed their bromance in a comic mode. Since then both the actors share an inseparable bond.

On the work front, Arjun was recently seen in the films Sardar ka Grandson and Sandeep and Pinky Faraar. Ranveer, on the other hand, was recently spotted getting back to work.

Details about what Ranveer is shooting for are under wraps but a source close to him informed, “He was shooting for a huge project that has been kept under wraps. Details of which will be made public soon. It’s an intense shoot today for him and Ranveer was seen in his trademark enthusiasm, ready to go.

He also has Kabir Khan’s 83, Jayeshbhai Jordaar and Cirkus in the pipeline.