Vinod Khanna in a still from Achanak.

From playing supporting roles in the initial phase of his career in films to being part of multi-starrers, to playing the lead in films– Khanna’s filmography has been an interesting one.

One of Bollywood’s most handsome and charismatic stars Vinod Khanna breathed his last on Thursday morning. The actor-turned politician was 70 and had been battling cancer for a long time. Perhaps one of the few actors who began his career playing supporting roles and eventually becoming a lead actor, Khanna’s career spanned over five decades. In fact, just weeks ago- Hema Malini starrer Ek Thi Rani Aisi Bhi- featuring Khanna as a king released in the theatres.

From playing supporting roles in the initial phase of his career in films like Purab Aur Paschim, Aan Milo Sajna and Mastana to being part of multi-starrers like Amar Akbar Anthony, The Burning Train, to playing the lead in films like Lekin, Achanak – Khanna’s filmography has been an interesting one. He had played the supporting actor, the patriarch in recent films like Dabang, Dilwale and juggled his political career with equal ease.

For the generation that grew up in the 1970s, Vinod Khanna embodied a true-blue movie star. Handsome, charming and stylish- Khanna remained in news for his films as well as his personal life.

Here are 15 films of the actor that celebrate the legacy that he leaves behind.

Hera Pheri (1976): Vinod Khanna and Amitabh Bachchan played con artists in this Prakash Mehra film which also starred Saira Banu and Sulakshana Pandit. The film was a commercial success and it earned Khanna a Filmfare nomination in the Best Supporting Actor category.

Haath Ki Safai (1975): Prakash Jha cast Randhir Kapoor and Vinod Khanna as brother who get separated at birth. While Khanna becomes a leader of a crime syndicate, Kapoor’s character becomes a small-time crook. Khanna won the Filmfare Best Supporting Actor award for the film that year.

Dayavan (1988): Feroze Khan’s directorial venture had Khanna playing a gangster with a golden heart. The film had raised many eyebrows at that time for its bold scenes between Khanna and a much younger Madhuri Dixit. 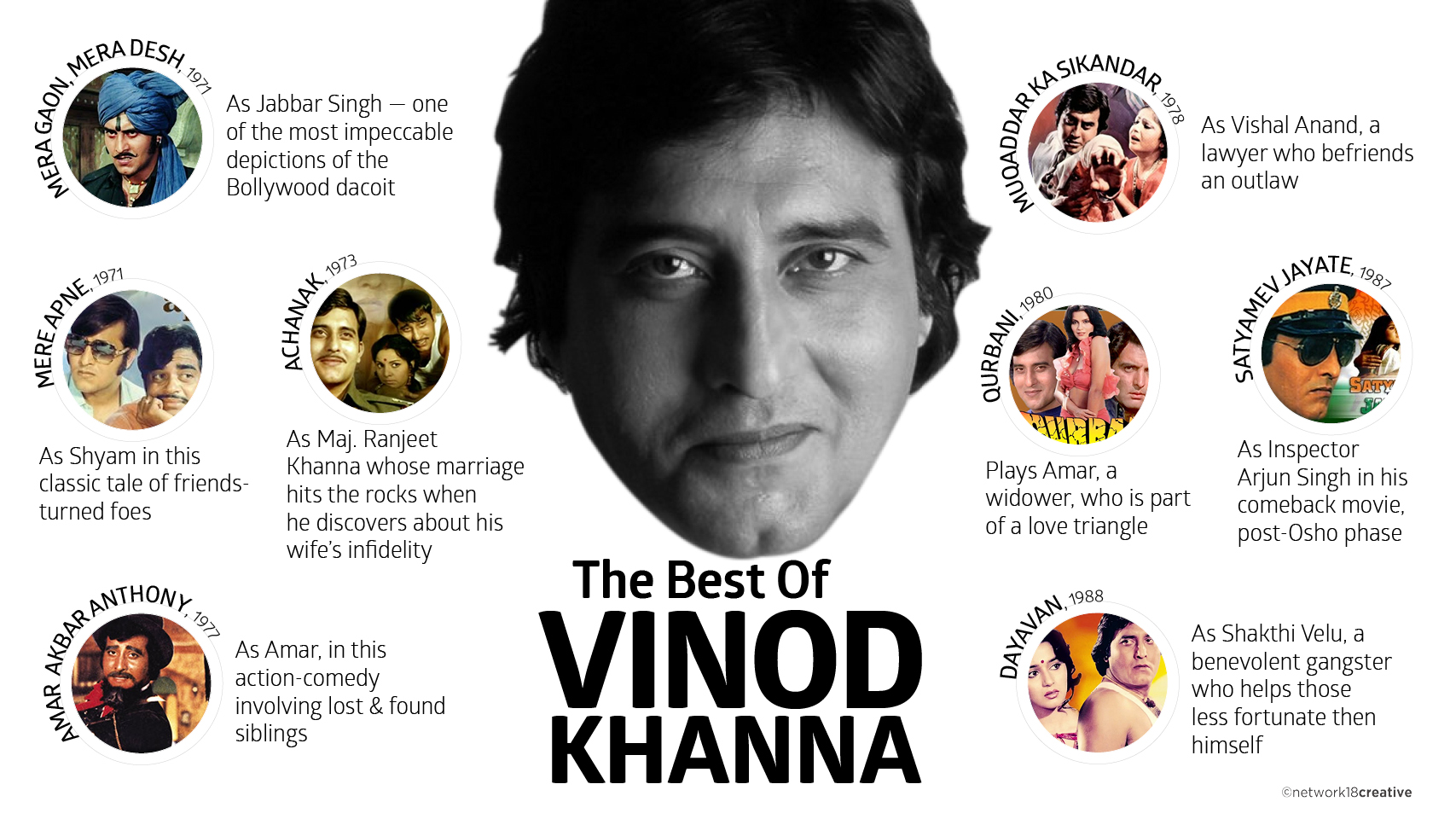 Amar Akbar Anthony (1977): One of the most iconic films that Bollywood has ever made, this Manmohan Desai film was classic story of three brothers who get separated at an young age, each then adopted by different families of different faith.

Muqaddar Ka Sikandar(1978): Although the film had Amitabh Bachchan playing the lead role, but Vinod Khanna’s supporting act was also lauded. The actor played a lawyer who saves Sikander and forges an unusual friendship with him.

Lahu Ke Do Rang(1979): This Mahesh Bhatt directorial film had Vinod Khanna in a double role playing both the father and the son. The film also featured Danny Denzongpa, Shabana Azmi and Helen.

Inkaar (1978): Directed by Raj Sippy, the film was a remake of a Japanese movie High and Low (1963) directed by Akira Kurosawa. Khanna played a police inspecter in this crime thriller that also featured Shreeram Lagoo.

Mere Apne(1971): Gulzar’s first directorial venture was a remake of Bengali film Apanjan and had Vinod Khanna and Shatrughan Sinha playing two young leaders of warring clans. Meena Kumari played the role of an aged woman in the film.

Lekin (1990): Although the film is remembered for its haunting music and Dimple Kapadia’s performance, but critics also loved Vinod Khanna’s performance in it. Khanna played the character of Sameer Niyogi , a government officer who is sent to Rajasthan to take inventory of items in the abandoned haveli. There, Niyogi encounters a beautiful lady called Reva (Dimple Kapadia) whom he deeply falls in love with. But is Reva real or just an imagination?

Parvarish(1977): Another film that had Amitabh Bachchan and Vinod Khanna playing the lead roles, this Manmohan Desai film had the two actors playing brothers who were raised by Shamesher Singh, played by Shammi Kapoor. While Khanna played the antagonist of sports, Bachchan’s character was all positive.

The Burning Train(1980): A multi starrer disaster movie had a gamut of Bollywood actors playing key roles in this film. Khanna played an engineer who makes the super fast express, a one-of-a-kind train which on its maiden journey is bombed.

Mera Gaon Mera Desh (1971): Vinod Khanna played dacoit Jabbar Singh in this Raj Khosla film. While the film’s hero was Dharmendra, it was Khanna’s performance as a dacoit that most remember till date.

Qurbani (1980): This Feroze Khan film is till date known for its style. The film had Khanna playing a widower deeply in love with Zeenat Aman’s character.