News18» News»Movies»Rhea Chakraborty Gets Back to Normal Life, Rajiv Lakshman Shares Pics from Get Together
1-MIN READ

Rhea Chakraborty Gets Back to Normal Life, Rajiv Lakshman Shares Pics from Get Together

Rhea, who has been mired in a drugs case, also joined them for celebrations. Rajiv shared some pictures with her on social media, captioning his post, "My girl." He later deleted the pictures from his social media handle.

Rhea is seen wearing a checkered coat in brown shade for the evening.

Another picture shows them all gathered together for a group click. Rhea is seated in the picture. 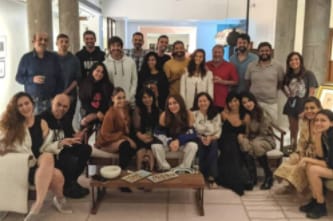 Only recently, director Rumi Jaffery had confirmed Rhea's comeback to films in 2021. Talking to SpotboyE, Rumi had said, “It has been a traumatic year for her. Of course the year was bad for everyone. But in her case it was a trauma on another level. Can you imagine any girl from a well-to-do middleclass family spending a month in jail? It has crushed her morale completely.”

Read: Sushant Singh Rajput was Innocent and Sober, Says HC As It Reserves Order on Plea by His Sisters

Rhea was arrested by the Narcotics Control Bureau in September first week on charges of 'possession, purchase and use' of drugs, which the agency investigated as a link to Sushant Singh Rajput's death. She was released on October 4 after spending about a month in Mumbai's Byculla jail. Rhea's brother Showik Chakraborty was also arrested by the NCB on September 4 and was granted bail after 3 months of his arrest.

Read: Rhea Chakraborty is a Talented Artiste, will Bounce Back: Rumi Jaffery

Sushant was found dead in his Bandra home on June 14, 2020. The autopsy conducted by RN Cooper Hospital had attributed his death to 'asphyxiation due to hanging.' Later, a report submitted by a forensic team from AIIMS had ruled out murder in his death. The investigation is still ongoing in his death case.