Planning to watch Ribbon this weekend? Read our review first.

Just like its title, Rakhee Sandilya's Ribbon ties a bundle of daily life issues in a partly impressive slice-of-life format. Some instances hit you hard, others feel like they're following a textbook format, but still manage to keep you at it or rather with it.

Sahana (Kalki Koechlin) and Karan Mehra (Sumeet Vyas) are a regular urbane couple residing in Mumbai. Both career-oriented working professionals find their life's turning point at an unexpected pregnancy. Quite the most of the beginning, Karan is a subtle reminder of Mikesh in Permanent Roommates but not as pokey as the latter. He seems to fit in a fervid Sahana's life. So while Sahana is a bit upbeat, Karan is calmer.

The two become parents to a little girl, Aashi. Some sacrifices here, some sacrifices there- the post-pregnancy period is perhaps the most relatable take on how nuclear families these days resort to child care services striking a balance between their personal and professional lives. Both Sahana and Karan manage to juggle between their life’s two disparate ends in their own ways. While Sahana takes on the rampant workplace sexism, Karan deals aptly with clients and colleagues at his construction business.

Both Vyas and Koechlin are extremely relatable in their respective roles and share quite a palpable equation. The scene in trailer wherein a composed Karan calms down an irritated Sahana describes their temperaments the best. 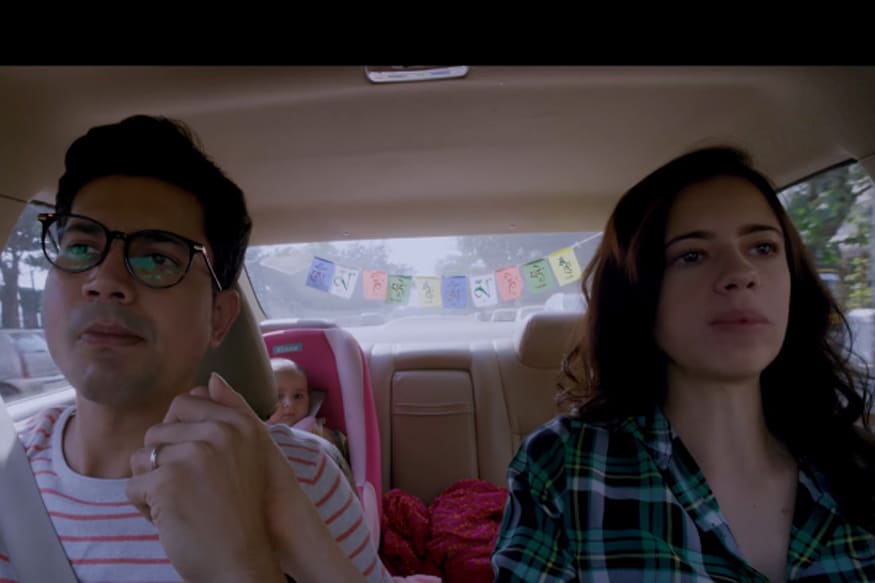 Also, the struggles they face and the compromises they make will instantly strike a chord with the young married couple's lives. For instance, it's heartbreaking to see Sahana coming back home to see her child crying and unattended while the nanny is busy entertaining her own family.

The film deals with more relevant subjects than one and while the blend mostly works in its favour, sometimes it loses the sight and dwindles a bit. The issue of corporate sexism is tackled well. Sahana's demotion from a strategic manager to an analyst post her maternity leave is spot on but a few job interviews that follow seem a little unrealistic.

Salindya doesn't keep the film centered around a particular phase for long, but opts for a slow pace in building up a rock-solid plot twist. And while revealing anything more about the twist will be unfair to the makers, it'd be sufficient to say that this particular point in the film is worthy of your time, money and mind space.

The film doesn't have many dialogues to rest upon, but a few out of ordinary life conversations to catch on. The camerawork seems partly of a documentary and partly of a web series but as a whole, the close-up car shots depict more than just what meets the eye. The vulnerability of a modern-day couple lays bare during those car rides it seems.

But what’s missing is the coherence and the evenness in its plot. This style of filmmaking looks intriguing, but it can often lead the mass audience to miss out on a few points. Questions like what if the plot twist was introduced a little early or what if the first half was paced up a bit begin to pop up towards the end. And hence, it feels as if the subjects at hand could’ve been dealt with in a little better way.

Also, what's amusing is that the trailer didn't give out as much as it should have. So while you'll be in thinking it's a light-hearted watch, it actually isn't. It can push you out of your comfort zone with some of its serious moments.

At a time when Bollywood is journeying away from the usual potboilers, a film like Ribbon is more than welcome. It addresses subjects that Bollywood and even parents sometimes shy away from addressing to their children. So even if the film is a little bland and a little uneven per se, Ribbon makes for a better watch than most of the no-brainers today.