Ryan Reynolds gave a shoutout to an Indian eatery in the UK after he had a hearty meal at the restaurant. The actor termed it 'best Indian food in Europe.'

Hollywood star Ryan Reynolds gave a shootout to an Indian eatery in the UK, after the Deadpool actor paid a visit to the takeaway over the weekend. The 45-year-old star found the curry experience so scrumptious in UK’s Cheshire that he dubbed the restaurant’s preparations as the ‘best Indian food in Europe’

The Green Lantern actor took to Instagram on Saturday and praised the Light of India Balti House in Ellesmere Port as he shared a picture of the restaurant’s menu with his 44.8 million Instagram followers on Saturday night. 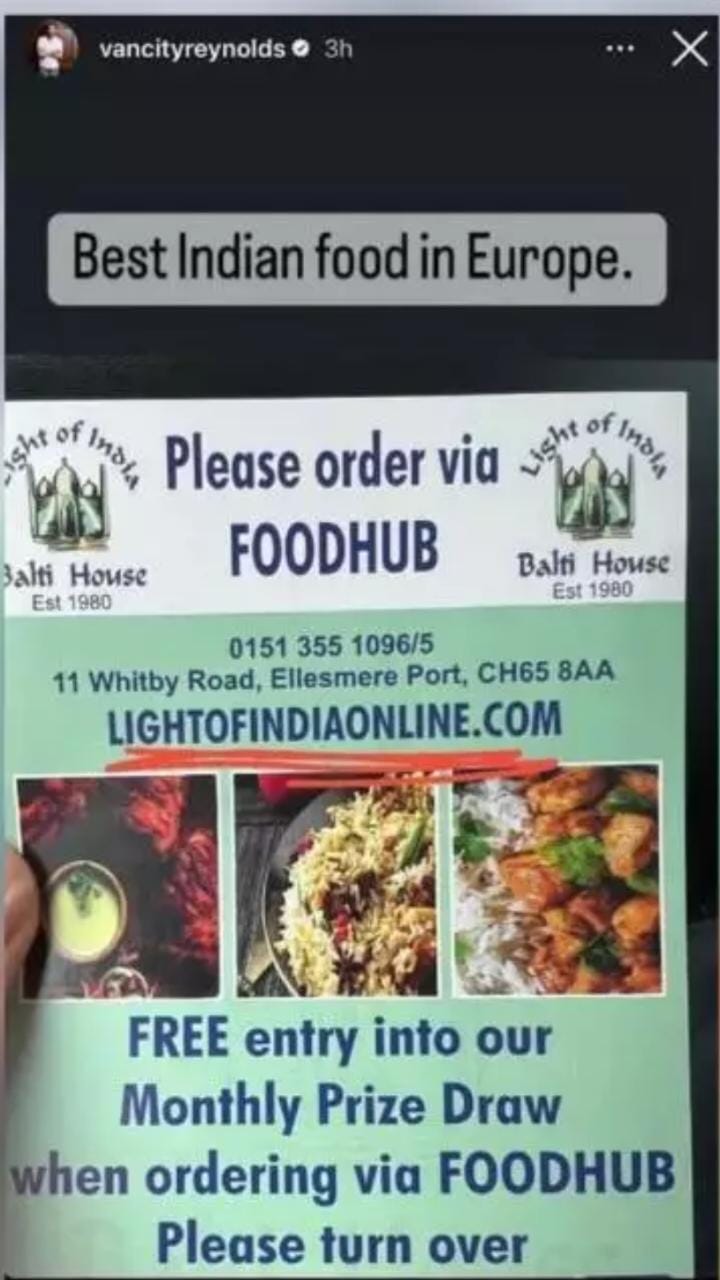 Also Read: Ryan Reynolds Wants to Slip into This Bollywood Star’s DM: ‘Pretty Sure Everyone In India Wants It Too!’

As Ryan posted the snap to his Instagram Stories, the Green Lantern actor didn’t reveal what he ordered from the establishment.

A little amazed by the reaction, the owners of the family restaurant have since reacted to the actor’s review. While many won’t believe, they had no idea they were serving food to a Hollywood A-lister.

The Rahaman family have been running Light of India at Ellesmere Port for three generations since 1980.

For those looking to visit the place, the modest restaurant is wedged between a credit union and a glazing shop in the Cheshire town of Ellesmere Port.

The Red Notice actor was in the UK after having taken over the ownership of the National League football club Wrexham AFC. As per a report by UK Mirror, Ryan and Wrexham co-owner Rob McElhenney are currently in the UK ahead of the launch of their Welcome to Wrexham documentary next week.

The TV series is set to give an insight into their new career path in Wales.

For those unaware, Ryan has made several trips to the UK since taking over Wrexham nearly two years ago, but the Deadpool 2 star recently revealed his wife, Blake Lively, wasn’t too impressed when she first heard about Ryan’s business venture.

He revealed the same during an interview on Jimmy Kimmel Live!, Ryan said: “I remember seeing Blake and saying, ‘I have bad news and I have really bad news. The bad news is I slipped into someone’s DMs again.’

“‘The really bad news is that I might have bought half of a fifth-tier national football league in Wales’."