Saif Ali Khan Asks Kareena Kapoor to Stop Clicking His Pics for Her Gram but She 'Can't Stop, Won't Stop'

Kareena Kapoor Khan took to her Instagram story section to give a glimpse of how she and Saif Ali Khan are spending their time on their flight.

Kareena Kapoor Khan and Saif Ali Khan are jetting off to Jeddah, as per the actress’ Instagram stories. The celebrity couple was clicked together at the airport as they were on their way to catch their early morning flight. Now the actress took to her Instagram story section to give a glimpse of how she and Saif are spending their time on their flight. In the first photo, she shared a snap of the screen in front of her whether it was written that the flight is travelling from Dubai to Jeddah.

In a separate Instagram story, the actress shared a photo of Saif. However, she also revealed that Saif refused to get clicked, yet she did it. In the photo, the actor is seen covering his face with his hands as Kareena takes his photo. Sharing the picture, the actress wrote, “And ofcourse…Husband - stop taking my pictures for your gram… Me-can’t stop won’t stop."

Take a look at her posts: 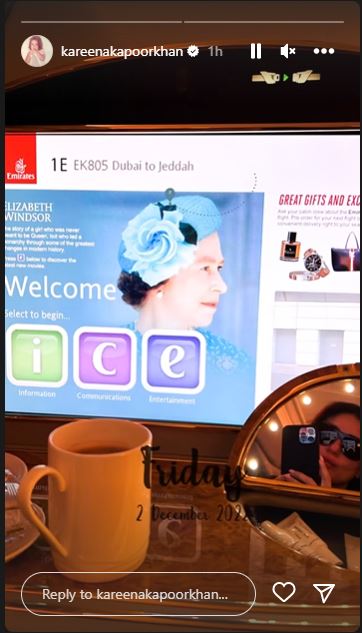 Kareena Kapoor Khan and Saif Ali Khan tied the knot in 2012 and welcomed their first born Taimur in 2016. They welcomed another son, Jehangir in 2021.

Earlier in the morning, the couple was clicked at the Mumbai airport and they looked their stylish best. Kareena was seen wearing a polka-dotted outfit which she paired with a leather jacket. Saif Ali Khan, on the other hand, looked dapper in a white kurta paired with a Nehru jacket.

On the work front, the actress was last seen in the film Laal Singh Chaddha with Aamir Khan. She will also be seen in Rhea Kapoor’s The Crew along with Tabu and Kriti Sanon. Besides these, Kareena Kapoor Khan will also be seen in Sujoy Ghosh’s adaptation of The Devotion of Suspect X. For this, she will share the screen with Jaideep Ahlawat and Vijay Verma.

Saif Ali Khan, on the other hand, will be seen in Adipurush with Prabhas and Kriti Sanon.