Sara Ali Khan Carries Her Own Luggage at Airport, Internet Can't Stop Gushing About Her Simplicity

Despite being a part of the royal family, Sara Ali Khan likes to keep her appearance and lifestyle simple and that's one of the reasons why so many people adore her.

When people see Sara Ali Khan, there are so many things that come to the mind, and amongst these things, simplicity is included. The actress has established her own identity in the industry in a very short span of time.

Despite being a part of the royal family, Sara likes to keep her appearance and lifestyle simple and that's why many feel connected to her.

On Monday evening, Sara was spotted balancing a trolley full of luggage at the Mumbai airport as she checked out of the gates and made her way to the car. As soon as her pictures of carrying her luggage emerged on social media, netizens couldn't stop gushing about the actress' humility.

One user wrote: "I think no sense of entitlement like this should be a normalcy for public figure. No need to handling over the luggage as long as you can do it yourself and of course, get rid the unpractical airport look. Be human, yet be kind."

Another said, "Oh, feel so bad she had to carry all that luggage by herself. and love her for her simplicity." 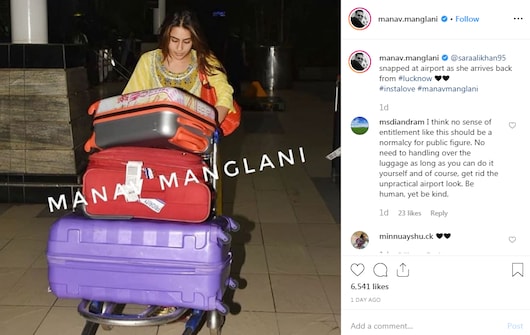 Earlier in the day, Sara was spotted with Kartik Aaryan at Lucknow airport, where he had come to drop off the actress for her flight to Mumbai. Sara and Kartik became the talk of the town when the former confessed having a celebrity crush on the actor on national television while appearing on Koffee With Karan in 2018. As per latest reports, Kartik also bonds well with Sara's mother Amrita Singh.

On the movies front, Kartik is fresh off the success of his last release Luka Chuppi. He has also signed up for Dostana 2, alongside Janhvi Kapoor, and a Bhool Bhulaiyaa sequel as well. Sara, on the other hand, has Coolie No 1 reboot opposite Varun Dhawan in her kitty.

Sara and Kartik are coming together for Imtiaz Ali's 2020 romance-drama film. The film does not have an official title yet but is largely referred to as Ali's sequel to 2009 hit film Love Aaj Kal.