Selena Gomez shared a video of her dancing in her bathroom to her song Vulnerable from latest album Rare.

Selena Gomez is making the most of her time in quarantine singing and dancing around to her song 'Vulnerable'. The singer posted a new TikTok video recently, looking cute as she pretended her comb was a microphone while showing off her moves in a casual outfit.

The 27-year-old pop star wore a loose-fitting long-sleeved shirt that she tucked into a pair of jeans. She also had her brown locks tied up in a high ponytail as she danced in her bathroom, reported Hollywood Life. 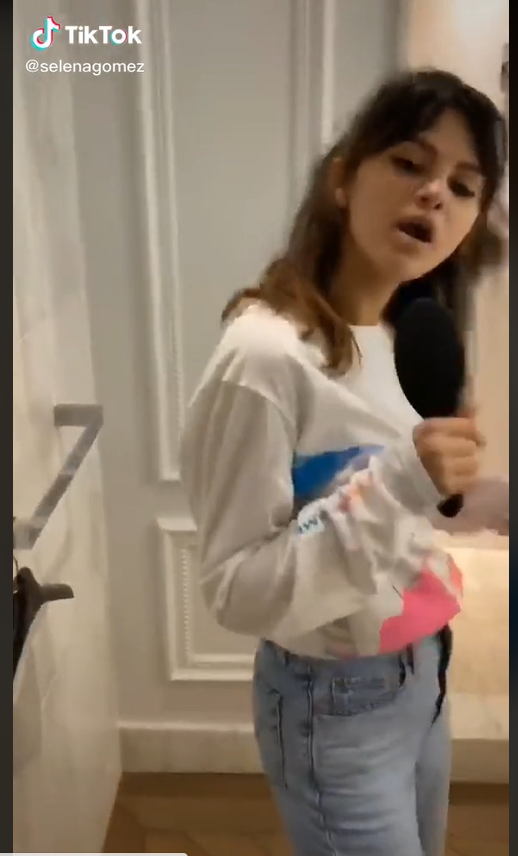 Dance appears to be a constant theme on Selena's growing TikTok account as many of its videos feature her and a bunch of her friends putting their moves on display. She dazzled her fans in a sexy gold dress while dancing with her choreographer Charm La'Donna on Thursday, April 9, to her track Dance Again.

Both 'Vulnerable' and 'Dance Again' are off her latest album 'Rare', along with the number one song, 'Lose You To Love Me'. Perhaps the popular video making social media platform has turned into a great place for her to promote it.

Recently, there was a viral video circulating of her kissing actor Timothee Chalamet, 24, which led to fans believing that that the two of them were dating. Chalamet recently confirmed his split with Lily-Rose Depp, 20, in an interview with British Vogue. But it turns out the clip of them kissing it up was from their 2018 movie A Rainy Day In New York.