As Shahid Kapoor practices self-isolation, the actor took out some time to play Q&A quiz on Instagram with his followers. Fans asked him several questions, some were around south films and actors.

Shahid Kapoor, who was busy shooting for his upcoming flick Jersey, has now taken a break amid Coronavirus pandemic. The makers were shooting the remake of the hit 2019-Telugu movie in Punjab while the COVID-19 pandemic forced them to postpone the shoot to a later date.

As the actor is now with his family in Mumbai, he took out some time to play Q&A quiz on Instagram with his followers. Fans asked him several questions, some were around the Telugu hit.

A user asked him to say something about South star Nani and his film Jersey. Shahid responded by writing, “He was fantastic. Made me cry so many times in the movie”.

He was also asked to say something about Tollywood superstar Prabhas, to which he replied, “He is amazing”. 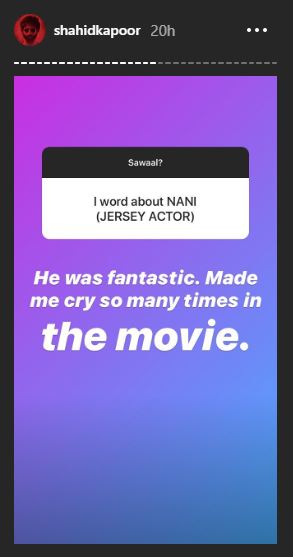 For the unversed, the upcoming sports-drama revolves around a talented yet failed cricketer, who returns to cricket after giving up on the sports earlier. He desires to represent the Indian cricket team and fulfil his son’s wish and present him a jersey as a gift. The Vivah actor is playing the lead role in the movie.

This is not the first time when Shahid is working in a Telugu remake. The actor also played the lead character in the remake of Vijay Deverakonda’s Arjun Reddy, titled Kabir Singh in Hindi. Released in 2019, the movie earned huge profits.