Home » News » Movies » Shefali Shah on Life after Delhi Crime: I was Typecast into the Mother Category
7-MIN READ

Shefali Shah on Life after Delhi Crime: I was Typecast into the Mother Category

Shefali Shah talks about all that has changed for her since Netflix’s Delhi Crime, Bollywood over the years and how, albeit unconsciously, she has carved her own path in her distinct, inimitable way.

The show traces the investigation of the horrific 16 December gang-rape case that made it impossible for the world to ignore the high and gruesome prevalence of crimes against women in India any longer. Directed by Richie Mehta, it busts several myths popularized around the high-profile 2012 probe.

Shah is still basking in the praise that she’s been receiving post Delhi Crime. In the show, she plays the lead—DCP Vartika Chaturvedi—with such remarkable ease and earnestness that she says a lot of people mistook her for an actual cop.

Here, she talks about the landmark show, what it has changed for her, Bollywood over the years, her love for performing arts, and how, albeit unconsciously, she has carved her own path in her own distinct way.

How did Delhi Crime happen?

Richie came to me. He didn’t narrate it, he just started telling me what it was about and why he wants to make it. It took me less than five minutes to say yes. When he was talking to me, I was just sitting and crying. I told him to give me a week to read the script and get back. But I finished reading all of it in one hour. I texted him right away and said, ‘Listen, I just have to do this.’ We will soon begin shooting for the second season.

Has all the praise translated into more substantial offers?

Nothing changes overnight. But at least now, they are considering me for roles that fall in my age bracket, they are looking at me as the lead for anthologies, short stories.

I am hoping it changes. It’s not drastic, it (the offers) is not equivalent to the appreciation, but I am really hoping that all this praise translates into more of the kind of work that I want to do. 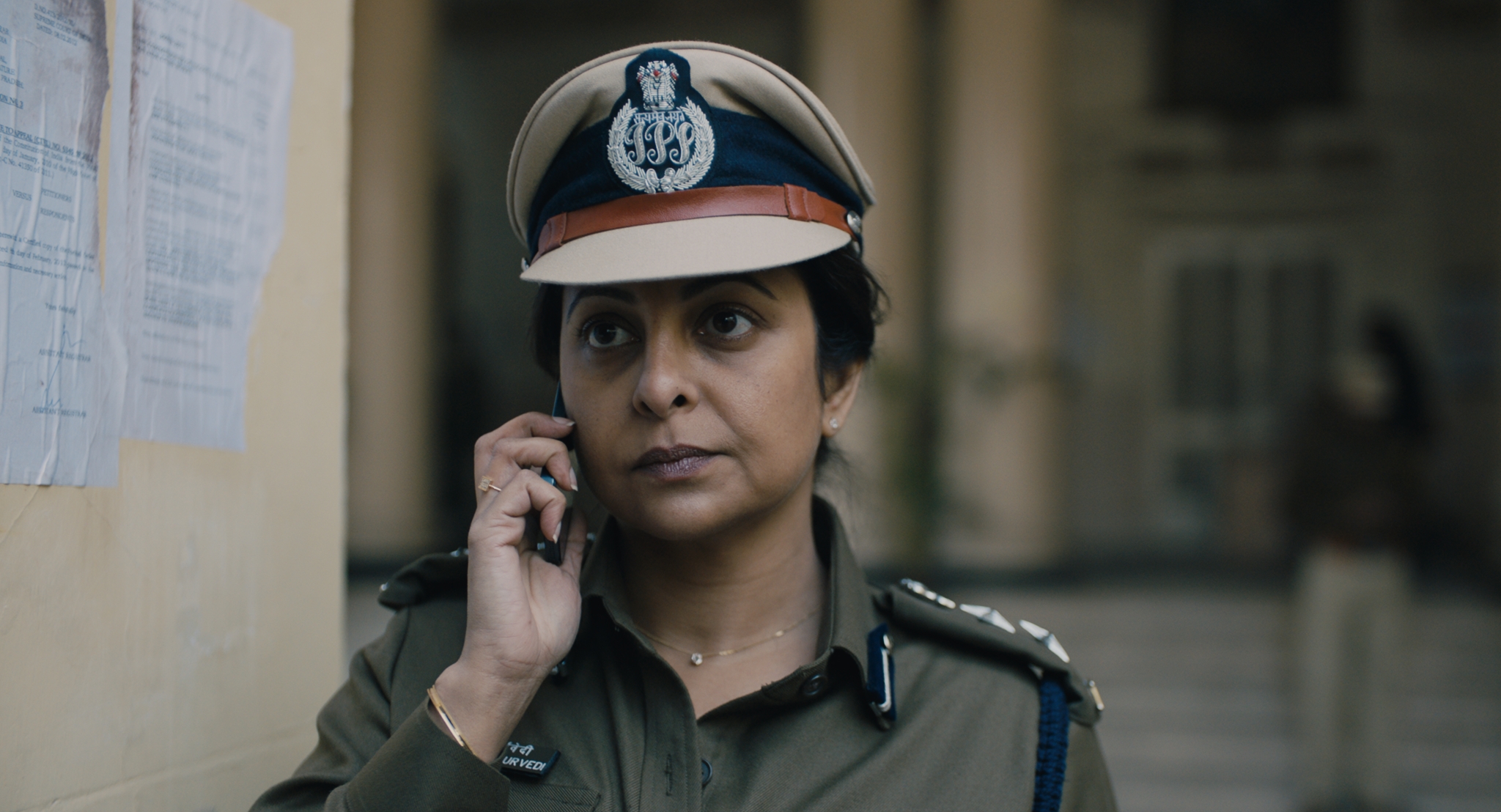 In an industry as ageist as Bollywood, you started playing older women quite early in your career. Didn’t you have any apprehensions before taking up such roles?

I work instinctively. I’ve never planned my career. But I have to admit that playing age early in my career got me into a bracket where they refused to see me as young. And by young, I don’t mean an 18-year-old, I mean my age. I was typecast into the mother category.

It’s only recently that films have started to highlight women, in whatever age they are, as center of projects. Whether it’s a Lipstick Under My Burkha or a Badhaai Ho or a Tumhari Sulu. It is changing, which is great.

Earlier, I used to look at it as a drawback, my playing that age and being stuck with it. Yes, it’s been pretty difficult to break that but now when I look at it, I feel that it’s a unique path that I paved for myself. I almost see it as empowering.

Yes, I did some things, but I wanted to do them at that point in time. It was impulsive and I don’t terribly regret it.

You have been a part of both commercial and independent cinema. What do you enjoy doing more? Also, how do you choose your projects?

It’s all about what touches me. I don’t work so much with my head as I do with my heart. Juice (her short film directed by Neeraj Ghaywan)—I said yes immediately, no brainer. Once Again—no brainer.

But yes, after Dil Dhadakne Do, I made a very conscious decision of not doing similar projects, whether it was a Neerja or a Kapoor & Sons. Both were offered to me, both were incredible scripts, both did very well. But I didn’t want to be typecast into that hole. So I said I’d rather wait.

Luckily today, the line between what’s art and commercial is diminishing very rapidly, which is great. Sometime ago you couldn’t think of a Badhaai Ho or a Piku or a Pink. Commercial films are great. I’d like to be a part of them. But instead of just being seen, I’d rather do something where the rules are being broken and I can contribute to it.

When I choose a project, I consider the director, my role and its importance to the story. I don’t define a role by its length. That doesn’t worry me. I mean in Satya, it was seven minutes, but it was still an important role. Give me something that really excites me and I am on board. It doesn’t matter if it’s a first-time director or an art film.

Read: After Zero, I Want to Live up to the Expectations that People Have of Me, Says Katrina Kaif

Read: Shutu is a Lot of Me, Says Konkona Sensharma as She Revisits A Death in the Gunj 2 Years On

There is a lot of talk about how meatier roles are being written for women more than ever before. And yet, we don’t see actors like you on screen too often. Do you think there has actually been a shift or is it just surface-level talk?

Aren’t things changing? Delhi Crime is a perfect example of it. Would you have thought of a Shefali Shah playing the lead earlier? Probably you would, but you’d never cast her. So here she is in the lead and she’s proved herself. So it is changing. Of course, I’d like more interesting work but it’d be unfair for me to say that it’s not happening at all.

What has been your most valuable learning through the years?

Actors are very vain. They think the world begins and ends at them. That’s not the case. There is a difference between taking what you do seriously and taking yourself seriously. Nothing is life and death, really.

Also, actors have this need to show everything in every frame. Why? This moment is not yours. You have to be able to disappear into the wall if need be. The moment you overcome that insecurity, you start being true to what you’re doing. Stop making everything about yourself. It’s not.

What, according to you, has been the biggest change in Hindi movies since you made your debut in 1995 with Rangeela?

The storytelling has changed so much. Also, today stars are doing off-beat films, which was rarely the case before. It is phenomenal, because it will promote this other kind of cinema. With superstars like Ranveer, Deepika and Alia doing films like Gully Boy, Chhapaak and Udta Punjab, the boundaries are blurring more than ever before. This is what is going to push content, writing.

Earlier it was restricted to the money a film would make at the box office, the songs and foreign locations, but now content is supreme, which is fantastic. Compliments and adulation must come your way only too frequently. What’s the best that you’ve got so far?

You know, certain people actually thought I was the DCP (in Delhi Crime) during the show’s screening at Cannes, which was like whoa!

One senior poet-lyricist called me after he saw it and said, “Aap kya hain?” A lot of people who love me often say, “What are you?” It’s just so humbling, all this love and appreciation.

You’re one of those rare actors who are very active and real on social media. What’s your head-space like when you’re at it?

You have to be real. If you’re not real, it’s not worth it. And I don’t shy away from laughing at myself. If you can’t do that, what’s the purpose? I am very goofy and this is as good as it is.

I was completely off it. I did not understand the purpose of social media. I find it extremely narcissistic to post pictures of yourself and say ‘This is the biscuit I ate right now.’ Seriously? Who cares? I didn’t want to be away because I am sitting on a high horse. It’s just that I feel why would anyone waste time doing this.

But my being active on social media is a very conscious effort of people who love me. They tell me that my audience wants to know more about me. The new generation of actors is very savvy. I am not. But if I put my mind to it, I will get there.

You sing, dance, paint and also write. Are you planning to take up any of it professionally?

Yes, why not? I’m a trained dancer—I have learnt Bharatanatyam for seven years. I’d love to write a book but I don’t know when. I also paint. I exhibited at the Jahangir Art Gallery (Mumbai). Then I did another exhibition in Pune. I want to explore all of it.

Read: Are You Binge-Watching Your Way to Obesity, Paranoia?

Read: We Should Reflect on Death at Some Point in Life, it Helps Us Prepare Better, Says Lisa Ray