The trailer of the war-biopic Shershaah, starring Sidharth Malhotra and Kiara Advani, shows Captain Vikram Batra's life and his ultimate sacrifice for the country.

The trailer of the highly-anticipated war biopic Shershaah, starring Sidharth Malhotra and Kiara Advani is out now. Shershaah tells the story of Kargil War martyr Captain Vikram Batra. Captain Batra, whose code-name was Shershaah, fought till his last breath, which contributed immensely to India finally winning the Kargil War in 1999.

What tribute can a reel hero give to a real hero. Except that your sacrifice inspired us for life, Param Vir Chakra Awardee Captain Vikram Batra! Honoured to share my birthday with you. Sharing the trailer of #Shershaah,the story of your heroic sacrifice.https://t.co/XZpmNSvYsM— Akshay Kumar (@akshaykumar) July 25, 2021

Karan Johar also shared the trailer, writing, “Honoured to have been a part of recounting this incredible story of the brilliance & bravery shown by our Kargil War hero, Captain Vikram Batra (PVC). Experience this thrill with the #ShershaahTrailer, out now!"

Honoured to have been a part of recounting this incredible story of the brilliance & bravery shown by our Kargil War hero, Captain Vikram Batra (PVC). Experience this thrill with the #ShershaahTrailer, out now!https://t.co/oXOG7PqOaq#ShershaahOnPrime releases on 12th August!🇮🇳— Karan Johar (@karanjohar) July 25, 2021

Talking about the trailer, Sidharth said, “Playing a man in uniform always instills a sense of pride but portraying a legendary war hero like Vikram Batra was a huge responsibility to shoulder on and perform. The role called for a lot of physical and even more mental preparation to get into his shoes and bring to life the real-life story of a man whose courage and grit stood unmatched. I have tried my best to stay true to his persona and valour and I am thankful to the Batra family for trusting me. Shershaah, as a film is very close to my heart, and it is only fitting that we launch the movie’s trailer at the Kargil Vijay Diwas celebrations. It is an absolute honour to be here among the brave hearts of the Indian Army and their families.”

Kiara Advani in a statement, said, “I am honoured to portray a strong and inspiring woman like Dimple Cheema, as it made me understand the journey of the unsung heroes, the women behind the army men. While we celebrate the valour of the men at war, the sacrifices of the women at home often go unnoticed. Shershaah not only brings light to the contribution of these strong pillars of support but also offered me a chance to pay my tribute to their brave choices. It fills me with great pride to be a part of the Kargil Vijay Diwas, we are forever indebted to the bravery of those who fight at the frontlines and their families who support them and our country unconditionally.”

Director Vishnuvardhan, who makes his Hindi cinema debut with the film, also said, ““I could not have asked for a better start than Shershaah to mark my foray into Bollywood, or a better setting to present the trailer of our movie. Shershaah is not just a labour of love, it is my attempt at saluting the heroes who have served our nation time and gain. It was challenging yet thrilling to shoot this film and bring to life a real-life story of grit and bravery. My aim was to make a film that familiarizes today’s youth with Captain Batra’s valor and inspires them. This film is my ode to his undaunting spirit to bring victory to India, his fearlessness and sacrifice.”

Ahead of the trailer launch, Sidharth, Kiara and producer Karan Johar went to Kargil via Leh, where they met a group of Indian Army Jawaans. In the pictures, Sidharth can be seen wearing ablack shirt with camo pants. Kiara, on the other hand, opted for a white T-shirt with ‘Yeh Dil Maange More,’ Captain Vikram Batra’s famous slogan printed on it. On the other hand, Karan Johar wore a yellow hoodie. Sidharth Malhotra, Kiara Advani and Karan Johar with Indian Army jawaans on the way to Kargil 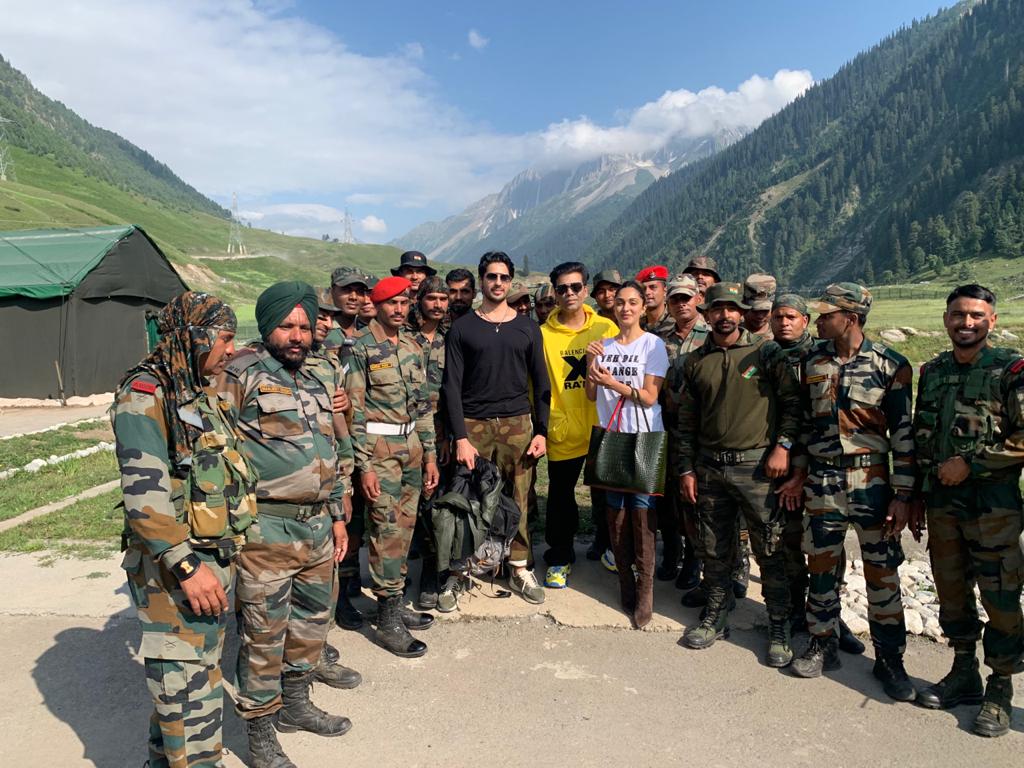 Sidharth Malhotra, Kiara Advani and Karan Johar with Indian Army jawaans on the way to Kargil

Shershaah is jointly produced by Dharma Productions and Kaash Entertainment. It will premier on Amazon Prime ahead of the Independence Day weekend on August 12, 2021.